The first elected female Deputy Speaker of the Lagos State House of Assembly, Honourable Adetoun Adediran has died in the early hours of Wednesday after a brief illness.

Adediran, the Women leader of the Lagos State chapter of the All Progressives Congress (APC), was reported to have been sick for just two days before her demise on Wednesday morning.

It was gathered that Adediran, who was supposed to be buried by 2 pm on Wednesday, “sneezed and ressurected” around 12 pm while being bathed in preparation for the burial.

A viral video wherein people were seen jubilating and thanking God that Adediran had woken up after she was reported dead also appeared on the social media.

READ:  Sheikh Ahmad Gumi Slams Those Calling For His Arrest, Says They Are Clowns

The former deputy speaker was later confirmed dead by a doctor.

Adediran has been buried according to Islamic rites at the Ebony Vaults, Ikoyi area of Lagos around 2.00pm after Muslim prayers were offered for her.

Adediran represented Surulere 1 at the Lagos House of Assembly between 1999 and 2003 when Dr. Olorunnimbe Mamora was the speaker.

KanyiDaily had also reported how a Delta State lawmaker, Hon. Ochuko Jude Adjekpovu died after being shot by gunmen suspected to be Fulani herdsmen. 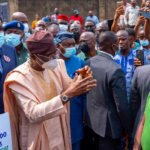