Imo State Governor, Hope Uzodinma has alleged that some suspects detained by security agents have named former Governor Rochas Okorocha and his son-in-law, Uche Nwosu, as sponsors of bandits and kidnappers. 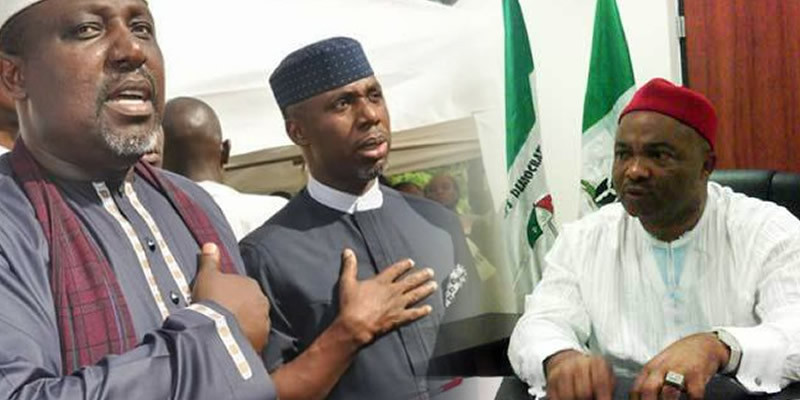 Following the incident, Okorocha had alleged that Nwosu’s arrest gave a glimpse into how Governor Uzodinma carries out criminal acts with “unknown gunmen” who are suspected to be policemen attached to Imo State Government House.

However, in a statement on Tuesday, Governor Uzodinma’s Chief Press Secretary, Oguwike Nwachuku, accused Okorocha and Nwosu of mounting the false campaign, because of fears they will be named as sponsors of insecurity the state.

According to him, the duo were specifically mentioned by suspects who are in the custody of security agents, as being sponsors of kidnapping and banditry in the state, using their relationship with former ex-militants to perpetrate the crimes.

The statement reads, “Plot by those believed to be fueling insecurity, particularly kidnapping, banditry, arson and cannibalism in Imo State ahead of January 4, 2022, Imo Stakeholders meeting got to a head-on Monday with false news of the alleged arrest of the security officers attached to Governor Hope Uzodimma.

“Governor Uzodimma, it is believed, will use the Stakeholders meeting to expose the identities of those behind insecurity and other forms of criminality in Imo State. This has prompted Imo citizens to become more curious to discover the identities of those undermining their peace and prosperity. Thus, the current media frenzy by both Rochas Okorocha and Uche Nwosu appears to be strengthening the notion of their culpability.

“To discredit the government and undermine the peace which the Governor has achieved so far, as was evident in the large number of Imo people who came back home from around the world for Christmas and New Year festivities, the duo have resorted to publishing falsehood yet again about security officers in the State Government House.

“Their claim of the arrest and detention of a certain Shaba, whom they falsely allege to be the CSO to the Imo State Governor is strange as the Governor’s CSO is not known by the name of Shaba both officially and otherwise. In addition, no security officer in the Governor’s security team was either arrested or is currently unaccounted for. As such, the entire story can best be described as a poorly scripted fabrication aimed at misleading the unsuspecting public.

“For the avoidance of doubt, Okorocha and Nwosu have been specifically mentioned by suspects who are in the custody of security agents, as being sponsors of kidnapping and banditry in Imo State, using their relationship with former ex-militants to perpetrate the crimes.

“Rather than clear their names, they appear bent on using both overt and covert means to blackmail the Police High Command, which legitimately arrested Uche Nwosu. They are also actively seeking to dent the image of the fine security officers attached to the Governor of Imo State.

“The public must be informed that the entire report is false and a failed attempt to frustrate the Imo Stakeholders meeting taking place on Tuesday.

“The mass of Imo People, who are undoubtedly peaceful and fun-loving are enjoined to discountenance the serial falsehood that continues to be churned out by the embattled duo. The focus and direction of the Gov. Uzodimma led government, it must be emphasized, will continue to be about the wellbeing of the people of the State, no matter what it takes.”

KanyiDaily recalls that the Indigenous People of Biafra (IPOB) had also condemned the arrest of Nwosu, saying it was now clear who created unknown gunmen to demonize it and its security arm, the Eastern Security Network (ESN).

To End Banditry, Let’s Bomb All The Forests And Replant The Trees Later – Gov El-Rufai