On Thursday, March 24, Burna Boy took to his Instagram page to announce that he won’t be performing at the festival due to unavoidable personal reasons.

He wrote, “I’m extremely gutted that I won’t be at Afro Nation Puerto Rico. Due to circumstances beyond anyone’s control. I will make it up to you all for sure! Love, Damini.” 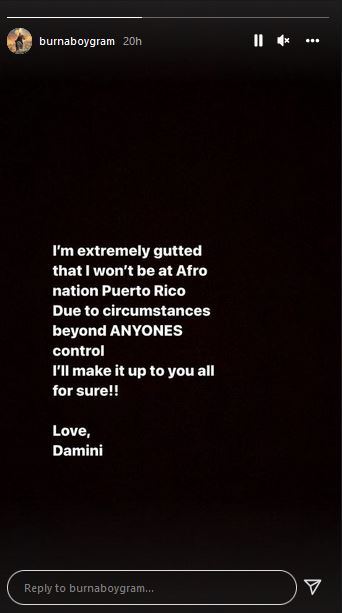 READ:  Actress, Eniola Badmus Reveals What Men Have Been Doing To Her Following Her Body Transformation

Hours after the disappointing announcement, the organizers of Afro Nation made a statement announcing that the American rapper will be replacing the Nigerian singer.

Afro Nation wrote: “Yesterday we were informed by Burna Boy’s team that it was impossible for him to make it to Puerto Rico for his performance at ANPR2022.

“We have spent the last 24 hours attempting to secure a replacement and are hugely thankful to Rick Ross for stepping in at the last minute to deliver you an incredible show.”

The Afro Nation Festival, which is returning this year after a two-year break, kicked off yesterday in Puerto Rico and ends on Saturday.

KanyiDaily recalls that Burna Boy recently survived a ghastly accident that saw him crash his $282,000 Ferrari outside Overcomers Church, Graceland in Lekki, Lagos.