Nigerian music producer, Samklef has reached out to popular singer, Wizkid over his alleged unclaimed royalties from his debut album ‘Superstar’. Samklef Reaches Out To Wizkid

KanyiDaily recalls that Samklef had recently revealed that he has not received his royalties from Wizkid’s 2011 project when the singer was signed to Empire Mates Entertainment (EME), a record deal owned by Banky W.

The producer, who threatened to sue Banky over the alleged unclaimed royalties. wondered why his name is not on the royalty split sheet for ‘Pakurumo’, a hit track off ‘Superstar’ album.

In his reaction, Banky denied any involvement in the royalty split saga. He also asked Samklef to take up his royalties claims with SONY/ASCAP/BMI and his publishers as he has never controlled rights to the song.

On Tuesday, Samklef alleged on Instagram that Banky W told him that Wizkid was the one who removed his name as the composer for his “Pakurumo” song.

The producer called on the singer to instruct his lawyers to reach out to him and address the matter so that he can receive his own share of royalties from the 2011 album.

He wrote, “Dear @wizkidayo remember we where brothers before anything @bankywellington say you comot my name from ‘Pakurumo’ publishing and also know about all my 11 years royalties. And na you give @sonymusic @sonymusicafrica.

“Let’s fix this in peace. Him say make (I) pour my anger to you. I know you don’t read your DMS (direct messages) so I will like you to instruct your lawyers to reach out.”

This comes after Banky W revealed that Wizkid left EME without fulfilling the terms of his contract as he had only released two of the five solo albums stipulated in his contract. 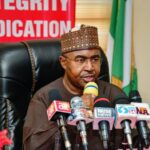