Professor of political economy, Pat Utomi has stepped down for Peter Obi, a former governor of Anambra State, as the presidential candidate of the Labour Party (LP).

The professor announced that he was stepping down for the ex-governor on Monday at the party’s presidential primary in Asaba, Delta State capital.

Utomi said he was stepping down for a younger aspirant with the capacity to affect the needed change in the Nigerian system, stressing that the time of the liberation of the country has began with the LP primaries.

Another aspirant, Joseph Faduri had also stepped down for Obi, who recently joined the party after withdrawing from the Peoples Democratic Party (PDP).

KanyiDaily recalls that Peter Obi had recently revealed that even though he wants to see Nigeria work, he’s not desperate to become the president.

READ:  2023 Presidency: Fayose Rejects Consensus Option, Vows Not To Step Down For Anyone 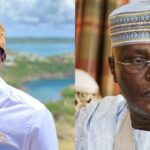