The Spiritual Director of Adoration Ministry Enugu, Rev. Fr. Ejike Mbaka has denied reports that he named a governorship aspirant that would succeed Enugu State Governor, Ifeanyi Ugwuanyi in 2023. 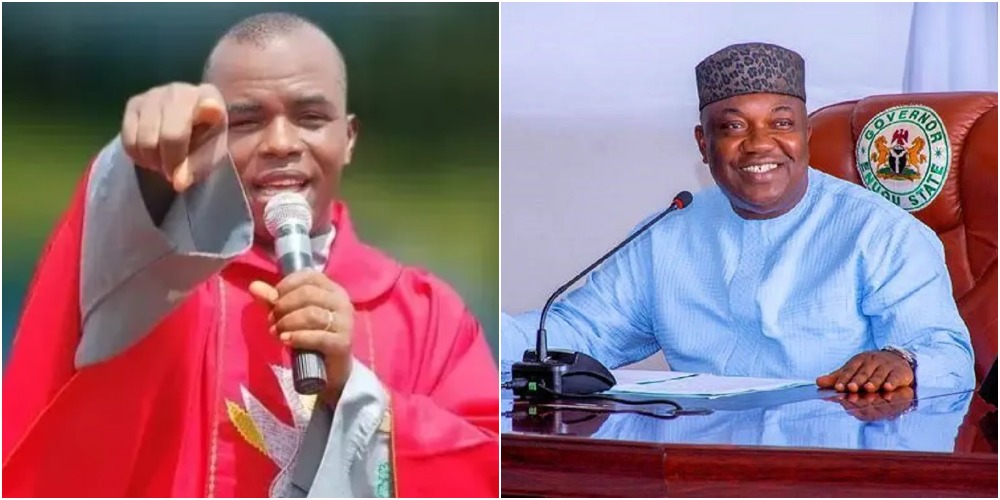 Reports emerged that the cleric named one of the governorship aspirants in the Peoples Democratic Party (PDP), Chief Evarest Nnaji, (Odengene), as the next governor of Enugu.

Reacting in a statement on Thursday by Ikechukwu Maximus Ugwuoke, the Media Aide to Mbaka’s Adoration Ministry, the cleric described the report as the work of mischief makers, stressing that it’s an absolute falsehood.

The statement reads, “Our attention has been drawn to the report in a section of the media that Reverend Father Mbaka, the Spiritual Director of Adoration Ministry Enugu has revealed a named Governorship aspirant in Enugu as the Next Governor Of the state and has canvassed support for a governorship candidate under a certain Political party.

“We make bold to refute the said report as it is false, misleading and ill conceived.

“To put the records straight, Fr Mbaka during his last Sunday mass in his characteristic passion for the good of the State and the country, prayed God to guide the Governor of the State His Excellency Ifeanyi Ugwuanyi and give him the wisdom to choose a successor that will build industries, create employment for the youths and care for the Enugu State indigenes and those residing in the State.

“He enjoined the worshippers to pray that the next Governor of the State shall be a man after God’s heart and not ‘a killer’, ‘a wicked person’, nor someone with ‘I don’t care personality’.”

“Never at any point during the said prayer did Fr Mbaka mention any preferred candidate nor enjoined the Governor to consider the candidature of any named Governorship hopeful.

“The satanic antics of the author of this report is to ridicule the name of father Mbaka if their said named candidate fails to be the next Governor of the state.

“We recall that this same antics was used by the same mischief makers during the last Anambra State Gubernatorial election.

“For this reason the legal team of the ministry has been detailed to trace the source of this mendacious report and make the authors and the publishers scapegoats.

“As the 2023 general election approaches, we are warning politicians and their supporters to stay clear of Fr Mbaka’s name and the name of the Adoration Ministry in their political propaganda.

“Fr Mbaka does not speak carelessly or out of his own volition on issues of such nature. He only speaks when the Holy Spirit propels him to speak. And the same Holy Spirit has always vindicated him.”

KanyiDaily recalls that Father Mbaka had recently asked President Buhari to focus on building more industries instead of purchasing more fighter jets that will be used to destroy the country.