Lagos State Governor, Babajide Sanwo-Olu has been asked to reverse the ban on Okada operations he imposed in six local government areas of the state. 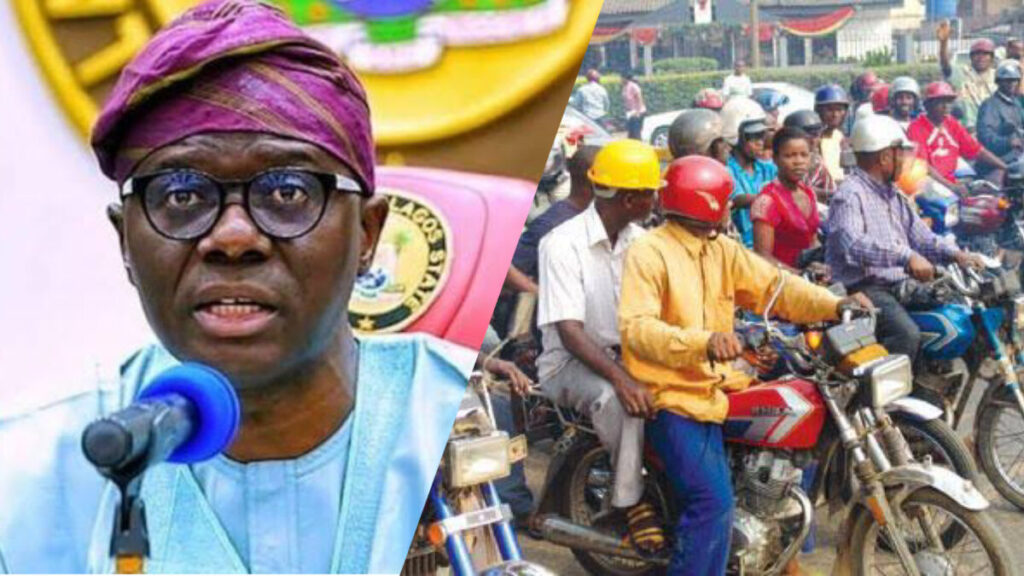 Some leaders of the Hausa community in Lagos made the appeal while reacting to the ban the governor on commercial motorcycle riders in six Local Governments and nine Local Government Development Areas in the state.

The ban on Okada riders in Lagos followed the gruesome killing of a sound engineer, David Imoh in the Lekki axis by suspected Hausa motorcyclists.

Speaking during interviews with Punch on Wednesday, Hausa community leaders said Okada riders who hail from northern Nigeria contribute significantly to the voting population of Lagos and should not be economically strangulated.

Seriki of Obalende, Saliu Waziri said Sanwo-Olu should rethink his decision, adding that the government should instead get the data of Okada riders in Lagos to fish out any intruder or criminally-minded fellows.

He said, “This issue has taken us a long time and we have been trying to put our members on the line. I want to advise the government to rethink its decision because Lagos can’t operate without bikes because of traffic.

Waziri, however, ruled out the possibility of taking any legal action against the state government.

The Seriki Hausa of Ajah, Ibrahim Ngoma, agreed with his Obalende counterpart that the government should consider the voting population of Hausa Okada riders in Lagos.

He said, “Truth be told, Governor Sanwo-Olu has been understanding with Okada people unlike Governor (Babatunde) Fashola.

“Okada members should obey the law while I appeal to Governor Sanwo-Olu to look into the matter and lift the ban before the election because the ban is affecting my people.”

Also, another leader of the Hausa community in Lagos, Iliyasu Kira, in a telephone interview on Wednesday, pleaded with Governor Sanwo-Olu, to reverse the ban.

According to the Seriki Hausa in Shasha in the Alimosho Local Government Area of Lagos, the voting population of the Hausa Okada riders in Lagos is not something the government want to joke with.

He said, “I appeal to the government to leave Okada riders to continue their operations. These Okada riders help the government during elections with votes. Our voting population in Lagos constitutes over 2.7 million because most of us vote here in Lagos. We are not all bad people.

An aide to the Sarkin Hausawa of Agege, Abdullahi Salihu, in a chat with The PUNCH, said the Hausa community in the state will not challenge the government’s ban.

He said, “The Chieftaincy Council of Hausa Community in Agege, under his Royal Highness, Alhaji Musa Muhammed Dogon Kadai, doesn’t challenge government laws. We believe that whenever government makes a law, it’s for the best of the general public.

“So, challenging the government’s law is like saying we don’t want the betterment of the state. We know that many of our people earn their daily income from the Okada business but that doesn’t mean that because of their own income we should jeopardise the security of lives and property in the state.”

Salihu said he also spoke with the Sarkin in three of the affected LGAs, saying they gave the same position as that of the Hausa leadership in Agege.

He said, “Majority of them are on the same page as we are here. They said our stand on the issue is also their stand, so that’s the resolution we have reached. We are urging every member of the community to abide by the rules and laws of the state government.

“Anybody found wanting, we’ll not be reliable for the person’s act because the law is the law anywhere. We cannot get our people to protest or take action against the law of the state government. So, that is the resolution we all came about after I called them.”

KanyiDaily recalls that yesterday, five people were also killed during a clash between traders and Okada riders at Dei Dei, a community in Abuja Municipal Area Council (AMAC) of the Federal Capital Territory (FCT).