Commercial motorcyclists popularly known as Okada riders were involved in a clash with officers of the Lagos State Police Command at LUTH – Idi Araba area of the state. 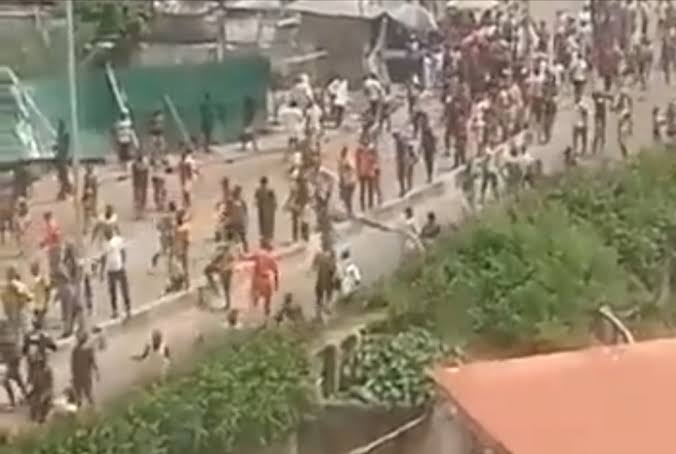 It was gathered that the Okada riders were revolting against Lagos State Task Force for seizing their bikes following the ban on motorcycle operations in some locations since June 1, 2022.

Lagos State Task Force have since then seized thousands of bikes from violators which are now routinely crushed publicly.

On Tuesday afternoon, some Okada riders started revolting against the okada ban in the Idi Araba area, accusing the state government for taking away their source of living.

In videos circulating on social media, gunshots were fired by the police as motorcycle riders began to retaliate and light up bonfires on some roads.

He said, “The Taskforce went well prepared. They (riders) were just causing a scene after Taskforce left with some of their impounded motorcycles.”

Hundeyin said the Rapid Response Squad (RRS) and men from the Area Command have been drafted to the scene, adding that there’s “absolutely nothing to worry about”.

Current update concern the situation at Idiaraba this afternoon

READ:  "I Made Mistakes, But I Never Slept With Your Best Friend" – Kaffy’s Ex-Husband

@LagosArewaYO @oil_shaeikh @followlasg @jidesanwoolu pls we need more explanation about @LagosPoliceNG why did task force about banning okada have the right to entered munchi local govt / idi abara to be specific while @jidesanwoolu did not mention munchi among the place that w pic.twitter.com/l1hwayHDj7

KanyiDaily recalls that the Federal Capital Territory Administration (FCTA) had recently ordered all Okada riders to obtain a licence to operate within Abuja.