The General Overseer of the Omega Fire Ministries International, Apostle Johnson Suleman has finally addressed the sex scandals involving him with many Nollywood actresses. 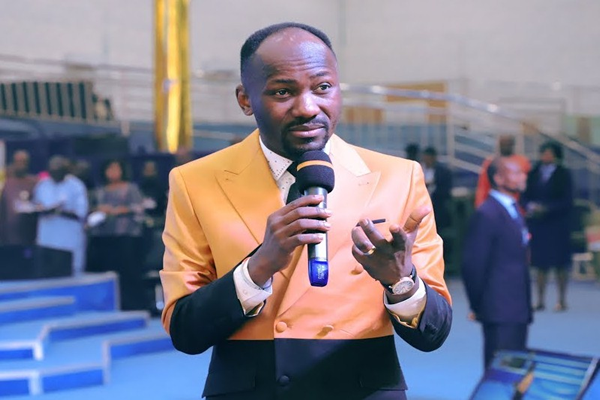 Some of the film stars have taken to social media to deny the allegations while others engaged in a war of words over the alleged sex scandal.

Reacting to the allegation during the mighty turnaround crusade in Sapele, Delta State, the cleric said no one drags him because he would use the dragging to gain more popularity for himself.

Apostle Suleman, who didn’t bother to deny the allegation, described the people peddling the rumor as ”fools”, saying that nobody can bring him down only God.

He said, “You know I have been busy with this crusade and I heard that they are dragging me on social media, that the man is diabolic, diabolic kill you there! You want to drag me? We will drag ourselves. Some of them come to my church, I should deny them because you wrote something, the news no long, make it 200, mumu! Ode!

“You want to drag a generator na me be dragging, if you stop, you no serious, we go craze, I’m the one that will disappear that blog. You attack politicians, you attack celebrities, you have come to me, you don enter my trap.

“When I saw the list I was just laughing, one man, see list, I was asking them who be this one, where this one dey. Some Nigerians went to those people’s pages and insulted them, anybody that typed an insult, it will backfire at them.

“Do you know why some of us don’t speak again about Nigeria, because the problem of Nigeria are Nigerians. Don’t talk for Nigerians o. You see rigging during elections, politicians don’t rig, it’s Nigerians that rig. Every nation gets the leaders they deserve, when you see a bad leader, it’s because the nation is bad! That’s the truth.

“So that thing you posted online, I should start shaking? I dey do crusade o, dem no dey drag me! I go use your dragging take popular. If you want to fight me make sure you have oxygen, because nothing dey shake me.

“I know some of my people now are angry that I spoke, oh papa don’t talk! Na the no talk dey give them power. All the celebrities and people they were insulting for what they didn’t do because one mumu somewhere is behind the keypad.

“Understand how social media works, it’s five percent from reality. Don’t let anybody intimidate you in this life, if they give you, give them, stop shaking. Don’t pay a blackmailer one Naira!

“Anything you want to write, write it! If wrapper wan tear, make e tear. I have told myself nobody will bring me down, I won’t let you, I’m on an assignment, if you want to stop me, go and meet God, only God can stop me! Na Edo I be o.”

READ:  BBNaija: Amaka Breaks Down In Tears After Verbal Fight With Phyna [Video]

KanyiDaily recalls that Bayelsa governor’s media aide, Bodmas Kemepadei had defended Apostle Johnson Suleman, saying that there is nothing wrong with a pastor sleeping with single ladies.

READ:  2023: Actress Hilda Dokubo To Run For House Of Reps In Rivers Under Labour Party