Jimeta Area Court II in Adamawa state has remanded a 19-year-old man, Sadiq Safiyanu, in prison custody for allegedly stabbing his friend, Ibrahim Dole, with a machete while fighting over N200 Indian hemp. 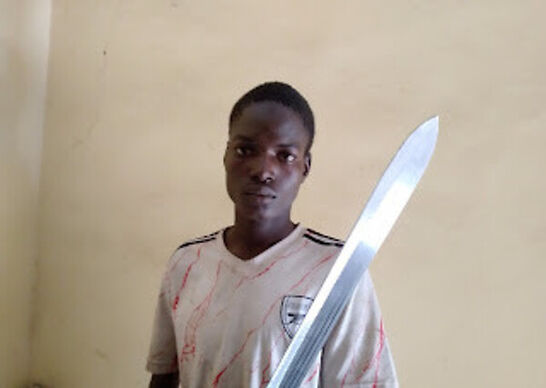 It was gathered that both men were dragged to court by the police for offenses ranging from the disturbance of public peace, inciting disturbance, and causing hurt contrary to sections 79, 80 and 217 of the penal code law.

Police said Sadiq stabbed Ibrahim in the hand on the 10th of December 2022, while fighting over the Indian Hemp which the latter allegedly seized from the former.

Investigations revealed that Sadiq sent a little boy to buy him the banned substance, however, on his way back, the boy was stopped by Ibrahim who then collected the hemp from him and seized it.

When Sadiq got wind of the situation, he picked up a machete and went to confront Ibrahim.

READ:  #JusticeForOmolara: Lady Calls Out Hospital For Killing Her Friend Over Alleged Negligence

Ibrahim removed the Indian hemp from his pocket and showed it to Sadiq, stating that no man born of a woman will collect it from him.

A fight ensued between both men and in the process, Sadiq stabbed Ibrahim in his hand.

Following their arraignment, both men pleaded guilty. After the defendants’ plea, the Prosecutor urged the court to adjourn the matter to enable him call a witness for the purpose of corroboration.

The court presided by Abubakar Balarabe, after hearing their plea as well as the application filed by the prosecutor, adjourned the case to the 10th January 2023, for corroboration and summary trial.

KanyiDaily had also reported how a 29-year-old man, Monday Ajasco, was arrested for allegedly stabbing his friend to death for refusing to buy him a drink at a beer parlour in Bauchi.

READ:  One Escapes Death As Two-Storey Building Collapses In Lagos