Rivers State Governor, Nyesom Wike has threatened to sack his Commissioner for Works, George-Kelly Alabo, if the contractors of a road project fail to mobilize to the site within 24 hours. 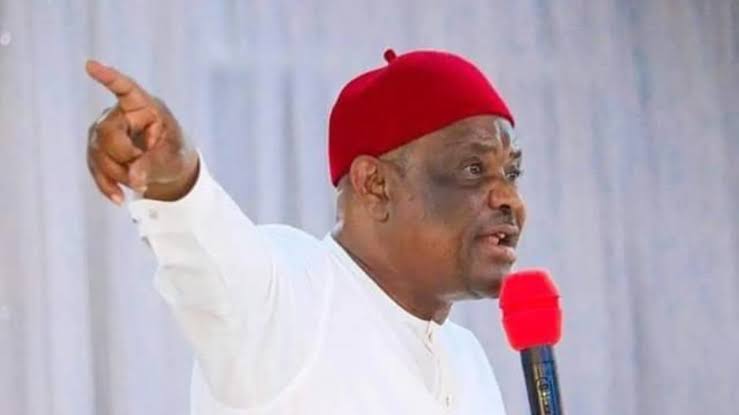 The governor threatened to sack the commissioner while conducting the flag-off of construction of Ekagho-Ogboloma-Adada Link Road in the state on Friday.

It started when Wike stopped his speech and asked the representatives of the construction company why they haven’t they mobilized to site.

The Commissioner responded inaudibly to which the governor saying;

“What is preliminary works? Did they collect our money preliminarily? Call the company, now! Let them come here.”

When a man of South-Asian descent appeared before the governor, the governor asked why the company had not “moved to site on the other road in Abua” after collecting the state government’s money.

“Soon we will start to move to that place,” the unidentified contractor replied.

A visibly angry Governor Wike responded; “Commissioner for Works, I give you 24 hours. If they don’t move to site, return our money immediately.

This company has collected the money more than two months ago, and you’re telling us now that they are preparing after [taking] money from us. Let them not move to site till tomorrow, I will sack you as the Commissioner for Works.”

Wike said there is no basis for the delay.

“You don’t take our money and keep it in the bank, and do your other businesses, and then the people are suffering. Before you know it, in March, the rains will start and then you tell us, ‘Because of rain….’ It can’t happen,” he added.

The governor urged the people of Abua/Odual to “shout” and “cry” on social media if they perceive a slow rate on the project, saying the outcry would get to his attention.

READ:  "South-East Shouldn't Be Talking About 'Igbo Presidency' Because It Doesn't Exist" - Okorocha

KanyiDaily had also reported how a politician, Chidi Lloyd, broke down in tears while apologizing to Governor Nyesom Wike for previously attacking his government.

READ:  Young Man Caught Inside A Supermarket With Stolen Canned Fish Wrapped Around His Waist