This is what is happening in drought-ravaged Somalia. Mothers have to walk for days to reach aid camps in Kenya and Ethiopia. This baby’s mother had to walk for seven days without food or water to reach an aid camp and by the time she got there, this is what her 7-month old son had turned into, almost starving to death. Doctors aren’t even sure little Mihag Farah, who weighs same as a newborn, will make it.

Mihag is just one of 800, 000 children that could die in Somalia in the worst drought in decades, because of the ongoing civil war in the country. The country’s prolonged drought became a famine because neither the government nor many aid agencies can operate in areas controlled by Al Qaeda-linked militants. 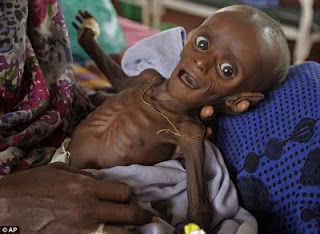