Menu
One of the kingpins, Bashir (surname not provided by State Security Services, SSS, officials) is still at large. 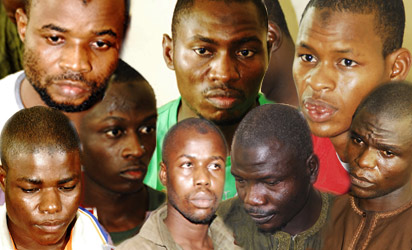 SUSPECTED BOKO HARAM MEMBERS—From left, Muhammed Dalhatu, Shuaibu Abubakar, Musa Adams Salisu Ahmed, Ahmed Hassan a.k.a Ezemako; Umar Ibrahim, Muhammed Ali and Umar Babagana at the Magistrate Court Abuja, yesterday. Photo: Gbemiga Olamikan
The eight were allegedly among those who bombed Independent National Electoral Commission, INEC, office on the eve of last April’s general elections; the bombing of All Christians Fellowship Church, Suleja; bombing of political rally in Suleja, Niger State, as well as, the bombing of Dkana Village in Bwari Area Council, Abuja
The trip from the SSS Headquarters located in Asokoro District of the FCT to Wuse Zone 2, the venue of the trial of the suspects, was witnessed with a long convoy of vehicles, which was largely made up of SSS personnel.
The arrangement by the SSS officials escorting the suspects to the court was almost mistaken by many for the convoy of Mr. President as the Peugeot Boxer conveying the suspects was sandwiched by other cars driven by the security agents.
Before the arrival of the suspects, the court premises was almost empty as the security men had combed the environment and took positions against any security breach.
In fact, immediately the car conveying the suspects stopped, the hefty SSS operatives who were armed to the teeth ordered the workers at the balcony upstairs to stop moving down stairs.
The court premises experienced extra ordinary silence, throughout the less than an hour court session.