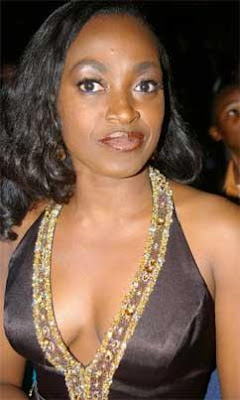 
Nollywood
actress, Kate Henshaw Nuttal’s marriage with her British hubby,
Roderick James Nuttal, who is the Managing Director of Ledrop Nigeria
Ltd, an agency  for Jack Daniels and Piper Hiedsieck Champagne, broke
down due to what we learnt to be ‘irreconcilable differences.’

Investigations
by Naijapals sources revealed that the estranged lovers had been living
in different apartments in Lekki, Lagos for the past few weeks before
the news of the marriage collapse became public knowledge.

Reliable
sources revealed that their separation was due to different cases of
infidelity leveled against Kate by her husband, Rod.

We learnt
from different sources that Kate who has a daughter, Ella for the
Britton had been accused by the hubby of enjoying hot romance with some
big names in the political and entertainment scenes for some years now.

Some
of the men that have been manipulated in the relationship with the
actress include the Executive Governor of Rivers State, Rotimi Amaechi,
former Governor of Cross River State, Donald Duke and renowned popular
comedian, Bright Okpocha popularly known as Basketmouth amongst others.

Our
sources disclosed that the sultry actress had been romantically linked
to these notable individuals but she always defended herself that her
relationship with them was purely official.

According to the
source, Rod reportedly overlooked his estranged wife’s affair with the
governors, hoping that she was only using her star status to get multi
million naira contracts.

Popular comedian, Basket-mouth was also
alleged to have dated Kate. We gathered that the two entertainers
usually meet at some undisclosed areas all around Nigeria, enjoying each
other’s company.

“ Her involvement with Basketmouth started
during one of the shows they anchored together outside Lagos. One thing
led to another and they eventually became very close and started to
enjoy each other’s company,” a source stated.