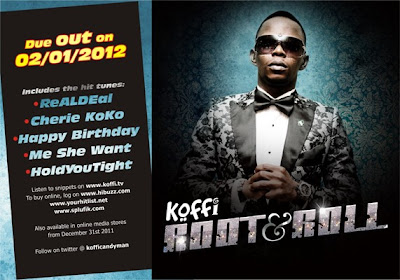 Root&RoLL is Koffi’s 5th studio album (Comfussion in 2004. Abinibility in 2006. TradofunkHIPsouL in 2008. Workerman Movement-All eyes Open 2010). This new album contains 12 Tradocentric groovy tunes with a spice of hipness plus a bonus track featuring members of workerman movement.
Each song has a different vibe and feel with strong emphasis on Naija percussions and ethnic drive albeit some borrowed western touch to give it a crossover modern tinge.
Album is devoid of lewd content and is good for family listening pleasure as it contains songs that cut across all age groups and gender.
Continue to see the fantastic songs in the album…
1.”Get Back Home” visits the issues of Nigerians stranded in harsh conditions in the diaspora e.g London.
2.”Real Deal” is a moniker and tune to accentuate the koffi brand as a great work of art as well as an entertainer
3.”Hold you tight” expresses the undying love of one who is love struck
4.”Happy Birthday” as it titles is an appreciation of everyone who wakes up to see each day of their lives other than their birthdate

5.”E get as e be” addresses the pain of most struggling young men caught in a failing relationship due to finance
6.”cherie koko” celebrates love amongst couples
7.”Me she want” emphasises the need for female gender appreciation
8.”Telemi” features Adunni of the female Ensemble Nefretiti and is a dedication to 2 people in love who aspire to marry
9.”Rawu-Rawu” is a bite at political scallywags and their innuendos
10″PawPawPaw” is a crafty tune done to express the female anatomy and warn against immoral dressing

11.”omo toh shan” borrows the tune of “Rosie” as previously done by blackky to celebrate the female gender and is rendered with a twist of reggae
12.”Toast” as it suggests is done to appreciate anyone who has cause to celebrate life
13.”GidiLove” with Workerman movement is done to appreciate the homebase of the clan,Lagos city.
Album is due out on the 2nd of January 2012
It boasts of production works by Yeankeyz,Outshine,Lowkeyz and Ex-o, mixed and mastered by Joe Ojaz. Video of Happy birthday was shot recently by DJ Tee and is already on air.