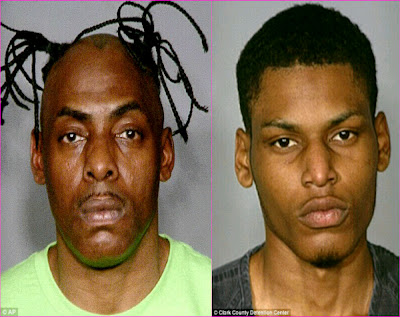 Rapper Coolio has been arrested in Las Vegas and was promptly placed behind bars at the same prison as his son. Law enforcement told TMZ that Coolio was a passenger in a Nissan Versa which was pulled over for a routine traffic violation early Friday morning.

They then ran Coolio’s name in the their system and discovered that he had two active bench warrants out for his arrest stemming from multiple traffic violations. Coolio was arrested and taken to Clark County Detention Centre.

It’s the same place that his son Grtis is incarcerated for allegedly robbing someone at gunpoint.
Coolio’s bail has been set at $5,850 and court date has not yet been set.

He has since posted bail and was spotted at Las Vegas casino the Golden Nugget following his release, according to TMZ.
Coolio’s oldest son, 22 , – who appeared on the family reality show Coolio’s Rules – was arrested on November 14, 2011 for allegedly busting into a Vegas apartment with a gun and forcing the tenant into the bathroom.