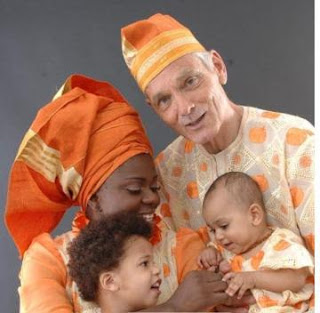 Anita Hogan, actress/ 2005 star of the Gulder Ultimate Search made headlines a few years ago, when her nude photos appeared in a magazine. After that, she quit Nollywood and married Ted, a Dutch citizen six years ago
Why I took a break

The
entertainment industry does not require you to be active every moment.
Sometimes, you have to relax and take care of other issues. I have not
done any production in a while. It is because I got married. You need to
nurture and water your marriage, not just relax. You need to give your
marriage time, invest in it and enjoy it. And this takes time. You have
to stay away from other things and concentrate on it. You have to set
your priorities right. Now I am back. I just finished a production. I am
involved in other projects. I am writing a book on Anita Hogan. I have
many stories to tell……continue reading!

My take on competition

I
am not participating in any competition. A lot of people come into the
industry with that mentality. You have to carve your own niche. You make
your contribution to the development of the industry. In the process,
you will not look at what other people are doing. Of course, this is a
money-making business and a producer always wants to use a ‘marketable’
face in his movie. The way it is, I don’t even need to inform any
producer or director that I am back in the industry. People should be
the one calling me and asking me about my new project and wanting to be a
part of it.

It is a television soap opera that I have titled Koko’s Diary.
I looked at the society from the diary of a house maid. I have finished
shooting the series. I have completed work on one season, but I am not
satisfied. I want to do more. I have a time schedule and I have been
advised to add more. I love what I have done so far. For casting, I used
fresh faces. I didn’t even play the lead role. One girl called Lola
played that role. She has very unique features. She was very flexible on
the set.

I
am married to a foreigner. I had to blend into his culture in order not
to suffer from culture shock. I had to learn the language and I took
the integration exam. Now I speak Dutch very well. I am very comfortable
with the language. I go wherever my husband goes. I am not the type
that says we should live apart. No matter how much money I have, I want
my family to live under one roof. There is nothing unique about marrying
a foreigner. He is just like every other man. It is not that I have
always dated a foreigner. I had dated Nigerian men and other Africans.
Men will always be men, no matter the colour of their skin, origin or
physical features. If a man needs attention, you will give him the
attention. A man’s needs are the same everywhere. Now, my home is
Holland. I have to be very partial. That is where I want my children to
grow up. Education in Holland is free and it is standard. There are no
separate schools for the rich or the poor. I bring my children home
often. I want them to know their African background.

Why my marriage has survived

I
am not going to compare my marriage with that of my colleagues whose
marriages broke up. Nobody prays to have a broken marriage. No woman
wishes to get married and watch it break up after some years. I don’t
make fun of situations that I don’t even understand. In my own case, it
is just God that has sustained my marriage. I might sound old fashioned,
but it is just God that has done it for me. He knows everybody. In
every challenging situation, He will always tell you what to do. I read
all books about marriage, but it doesn’t work that way. You have to go
into a marriage with an open mind and then make the best situation out
of anything you see in it.

The
scandal happened some years back. Life is all about challenges. I
learnt that one does not have to run away from anything that is thrown
at him. If you run, the challenge will still be there. On the night that
the pictures were published, four popular actors came to my house with a
car and said I should pack my things and go to Ghana. They said I
should stay there until the crisis died down. But I told them I wasn’t
going to run. I didn’t do anything wrong, so why should I run? I didn’t
kill anybody. I am not a criminal. Many politicians are stealing our
money and making a mess of our country, yet they come out with bold
faces. So why should I run? Somebody offended me and you want me to run?
The actors were shocked with what I was saying. I told them I wasn’t
going to run and that all I needed was their prayers. I don’t think I
know where that courage came from, but I think my father’s spirit was
with me. My father told me he loved me. I am tough. I had to practice
what I preached. A lot of people thought that crisis would break my
toughness. You can bring me down, but you can’t break me. You are not my
creator. My life is in the hands of God. It was just God that gave me
the strength.

How my family and friends reacted to the scandal

Many
parents would have come up with a holier-than-thou attitude. But mine
kept telling me how much they loved me. They stood by me. It was one of
the things that kept me going. Some people said I married the man
because of the scandal. Only time will tell. Immediately I became an
actress, I knew I had forfeited my privacy. Time will tell if my
marriage will be successful. I am only enjoying what I have in my hands.
I am enjoying my family.

I
am human. Of course, sometimes I think of that scandal and I become
very sad. It has become part of my personal history now. There is no way
anybody will mention Anita Hogan and that scandal will not be
remembered. But it depends on the angle you look at it. My children will
hear it. Even my grandchildren will hear it and say their grandma is a
‘hot’ mama. What if I hadn’t married the same guy? We were just two
people fooling around in our privacy. Should other people have told us
how to sit down in our home? It depends on the angle you look at the
scandal. That is why I want to write my book. Many people are
psychologically and emotionally harassed. My own case was harassment
from the pit of hell. Some people need encouragement. They are not as
tough as I am. I want my book to touch people who are being harassed. No
matter how much you have been pushed, you can get your life back.

I
don’t get embarrassed. If I am walking on the street and I don’t touch
you or hit your car and you just stare at me, it is your business.
Nigerians respect other people’s’ privacy. I was brought up to
understand that stares will not tear your cloth. Embarrassment will not
tear your cloth. It is good to live a perfect life, if you can achieve
it. But if it doesn’t happen, there is nothing you can do but to move on
with your life. I have forgiven the guy that published those pictures.
In fact, I forgave him that first week. My pastor called and said I
should forgive. He said I should just kneel down and say ‘I forgive
him.’ I didn’t know how to do it. I thought it wasn’t going to be
possible. But somehow, I did it. I have forgiven him.

My
parents had a problem. Both of them remarried. I was their only child. I
chose to live with my dad because he had money. I chose him because of
the comfort. I have a very wonderful relationship with my stepmother. I
am closer to her than my biological mother. It might be because I stayed
more with her. In spite of the fact that my parents had a
misunderstanding, they saw to my education.

I
hold a bachelor’s degree in Theatre Arts and a master’s degree in
International Law and Diplomacy. My father said I should pursue my
dream. He had wanted me to work with the government. He said it was
pensionable. Also, he wanted me to be an athlete. But my heart always
leaned towards the arts.