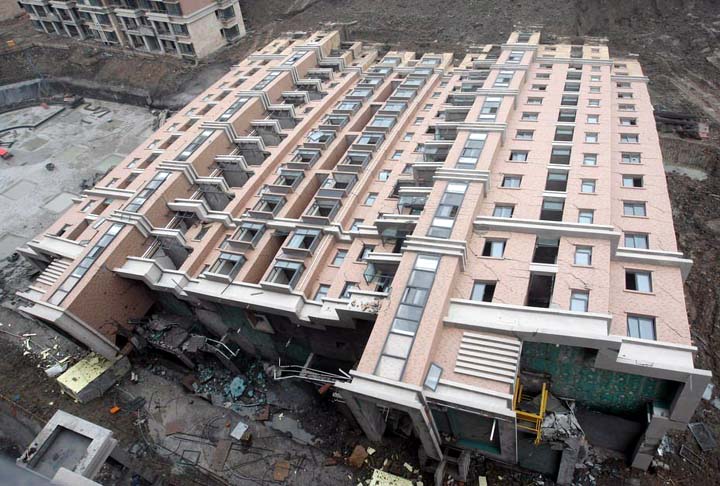 The Lagos State Government has sealed off a distressed three-storey
building and evacuated its occupants on Ajayi Road, Ogba area of the
state in Southwest Nigeria. The three-storey building has eight
flats with over 50 occupants while a church, City of Divine Grace
International uses the ground floor of the building for worship. A printing press and a diagnostic centre also use the building for their businesses.

A Boys’ Quarter, a storey building with three flats is at the back of the building, was also sealed off.
Officials
of the Ministry of Physical Planning and Urban Development, led by the
Permanent Secretary, Mrs Oluwatoyin Ajayi visited the distressed
building on Monday and passed a vote of no confidence on it.

According to Ayayi, government
moved in yesterday to evacuate every occupant of the building to avert
loss of lives and sealed off the building, saying that government would
demolish the building any time from now.

“We have sealed off the
building and ensured that nobody enters into it again. We also have
taskforce officials here to enforce compliance. We have seen the level
of distress of this building and we will bring it down without allowing
it to affect other buildings around.

“There are eight families in
this building and the building is also being used for commercial
purposes. We have a mini-church and a printing press here,” she said.

She added that “our material testing laboratory has been here and they
said the building has lost its integrity and our engineers have
certified that the building is not repairable. We have to move in
tomorrow (today) and bring it down.”

One of the workers at the printing press, Mr. Solomon Olajojo told P.M.NEWS
that the cracks in the building were first discovered three weeks ago,
saying that the caretaker of the house was informed but that nothing was
done about it.

He said on Friday night, they discovered that the
building having more cracks and that on Saturday it became dangerous to
dwell in it.

“One of the occupants who locked his door and went
out could not open it when he came back because the weight of the
building tilted toward the left where his flat is located,” he said.

P.M.NEWS gathered that the building was erected 35 years ago, while the owner was dead and his three children are living abroad.