A burglar has been jailed for one of a series of raids which terrorised Britain’s oldest person. Jesse Coker, 46, tricked his way into Grace Jones’ home in south London a month after her 112th birthday. It was the third break-in within weeks suffered by the frail pensioner, Woolwich Crown Court heard.Her property on the Southwark Park Estate, Rotherhithe, has become a magnet for crooks.

Five days before Ms Jones’ 112th birthday, a thief entered her home and stole her £300 pension.
The next day an attempted robbery took place leaving the supercentenarian frightened and unsure whether she could ever recover.
Coker struck just over a month later on January 24 at around 10.45am, said prosecutor Vivian Walters.

He rang Mrs Jones’ doorbell pretending to be a delivery driver.
Ms Walters said: ‘Mrs Jones went to the door and called out, “Who’s there?”
‘She was expecting the district nurse to visit her that day in order to change a dressing on her leg.
‘She heard no reply so she opened the door a crack.

‘He pushed the door open, barged past
Mrs Jones and made his way into the flat. In the living room, he found
her bag, rifled through it and removed her purse.’
Coker was caught after two neighbours recognised him and alerted the police.
Matthew Madigan, whose flat overlooks the pensioner’s on the estate, approached Coker who threatened to stab him.
Mr Madigan and next-door-neighbour Tracey Simmons who joined him were praised by Judge Stephen Dawson for their bravery. 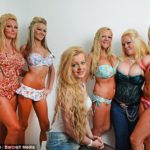 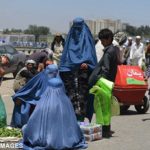