It has been confirmed that President Goodluck Jonathan made a
hasty departure from Botswana, cutting down his state visit by one day.
A source traveling with Jonathan in Malawi and Botswana told
SaharaReporters that the president’s surprising and sudden departure has
increased speculations among members of his delegation that his wife’s
health condition may have taken a bad turn. “Some of us are even fearing
that the First Lady may be dead,” our source said. …continue reading

Mr. Jonathan arrived this morning in Gaborone, the capital of Botswana,
after a state visit to Malawi. He was scheduled to stay in Botswana
until tomorrow. However, Jonathan hurriedly left for the airport in
Gaborone in the middle of a state luncheon. After hopping on a
helicopter to visit a mine, he returned to the airport and hurriedly met
members of the Nigerian community. He then got on his presidential jet
and took off, leaving his ministers and other members of his delegation
behind in Botswana.

Our source said that Mr. Jonathan told a few members of the delegation
that he was headed back to Abuja. But, according to the source, several
members of the president’s entourage suspect he may be headed to Germany
to see his wife, Patience Jonathan, who is admitted to a hospital in
Wiesbaden, Germany.

“The president appeared to be in a pensive mood as he left Botswana,” our source said.

Since yesterday, there have been speculations among government officials in Abuja that the ailing First Lady may have died. 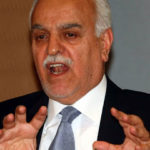