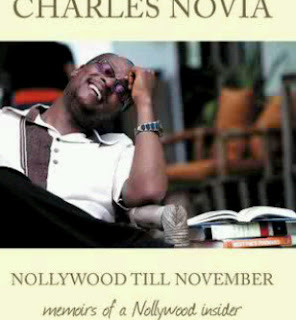 Nollywood is the general moniker for Nigeria’s exciting and thriving film industry! Behind its world-wide acclaim as an independent filming success story is an oft-ignored back story; the pains, push and perseverance of the major film-makers in the business. ‘

Nollywood till November’ tells the insightful and exciting true story of Charles Novia, from his trudging days as a struggling film maker in the then cabal-styled Nollywood, to his eventual triumph And success as a major force in Africa’s biggest film industry!

Novia’s memoirs reveal a personal perspective of the monumental struggles each of the now-famous personalities in Nollywood must have faced on their road to fame. It is a brilliant first-of-its-kind book ever from that sector  and an inspiring tale of succeeding against the odds in an industry that has been termed ‘the third largest film industry in the world’

It’s now available in America and Europe on Amazon books.com, barnesandnoble.com as well as Authorhouse.com. Published in America by Authorhouse books. It can also be accessed on the e-book platform. The Nigerian launch and release is slated for early October.