A 25-year-old Nigerian tiler, Ebenezer Makati, who allegedly bit off part of his girlfriend’s two ears, following a lover’s spat, on Tuesday appeared before a Tinubu Magistrates’ Court in Lagos.

Makati, who lives on Marwa Street, Elf Bus Stop, Lekki, is facing a two-count charge of unlawful assault and infliction of grievous bodily harm on his girlfriend, Peace Tunde.

The prosecutor, Sgt. Daniel Ighodalo, told the court that the accused committed the offence on 16 February at the Goshen Estate in Lekki Phase 1, Lagos at 11:00 p.m.

He said that the lovers fought following the absence of Tunde at the residence of the accused on Valentine’s Day.

According to him, the couple had been in a relationship since 2010.

Ighodalo said that accused went to Tunde’s house to confront her over her absence at his place on Valentine’s Day and to inquire about the man that picked her phone when he called.

“When he did not get the desired response from her, Makati, who claimed to be under the influence of alcohol and drugs at the time, beat her up and bit off parts of her ears,” Ighodalo said.

He added that the offences contravened Sections 171 and 243 of the Criminal Code, Laws of Lagos State, 2011.

The accused pleaded not guilty to the charges. The magistrate, Mrs O. M. Ajayi, granted Mataki bail in the sum of N100, 000 with two sureties in like sum and adjourned the case to 6 March. 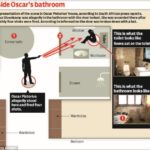