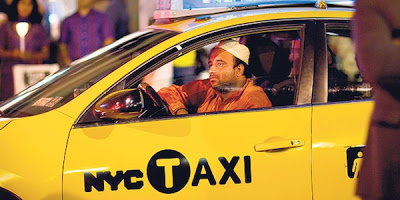 Somalian-born Muslim cab driver Mohamed A. Salim picked up Ed Dahlberg of Clifton, Virginia outside a Fairfax country club last Friday at around 2 a.m. When Dahlberg attempted to bring a beer into the cab with him, Salim told him this was against the rules and he had to finish the drink outside before entering.
Dahlberg then asked Salim where he was from and whether or not he was a Muslim. After Salim answered his questions, Dahlberg asked Salim what he thought about the concept of “jihad.”…..
Sensing that the conversation could quickly turn into a flagrant expression of racial discrimination, Salim began recording the exchange with his phone.
“On the video, a middle-aged businessman can be heard asking Salim if he is Islamic and then asserting that most Muslims are terrorists. He says the Koran directs Muslims to kill nonbelievers and then repeatedly and loudly demands that Salim denounce the Sept. 11, 2001, attackers. When Salim asks if the passenger is threatening him, the passenger uses an obscene phrase to respond in the affirmative.
‘If you’re a Muslim, you’re a [expletive] jihadist,” the passenger says. “You are just as bad as the rest of them.’ ”
Salim made it clear that he had a huge problem with this statement and that just made his belligerent customer even more hostile. Dahlberg leaped forward and began punching Salim in the face, breaking his jaw.
Salim stopped recording to call the police. Dahlberg repeatedly referenced the Boston bombing as to why he had become so angry to find out the driver was Muslim.
Police quickly arrived and arrested Dahlberg, who was charged with a misdemeanor.
Aside from a broken jaw, Salim says he has also lost partial vision and hearing from the assault. A married father of four, Salim is a U.S. Army Reserve veteran of the Iraq war who has worked in military intelligence and as a linguist.
The Washington-based Council on American-Islamic Relations is asking Virginia prosecutors to treat Dahlberg’s actions as a hate crime.

Related Topics:american beats up taxi driver over bombingNewsPHOTOSPEAKS
Up Next

Supporting Nigeria Against Biafra Was Our Greatest Mistake — Asari Dokubo