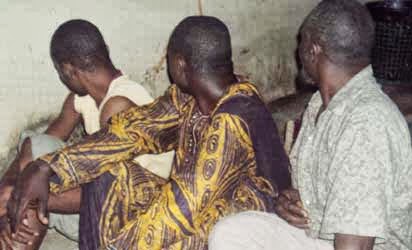 These men were arrested by operatives of the Special Anti Robbery Squad, SARS, Ikeja and they specialize in selling live  humans and decomposing human parts for money rituals. They are Gazali Akewadola (60), the native doctor  who allegedly offered N40,000 for a live human being, Alfa Taofeek Akinola  (35) and Kazeem Sanni (25).

To the bewilderment of all, Gazali confessed that live human beings were cheaper than buying dead human parts, saying all parts of a live human being are vital in the preparation of money ritual.

For instance, he said a life human being was bought for N40,000, “but at the end of the day, you get a lot of  expensive parts  from it. Aside that, it is even more potent  because the efficacy of the charm or concoction  prepared with live human parts cannot be compared with the ones prepared with dead parts.

“When a life human being is killed, one will get fresh blood which is used in preparing some charms. The same body will also give you hairs from private part, head and some  mustache which are used for other ritual purposes. The private part is also very useful for the preparation of effective concoction. The head,flesh intestines, liver, heart, eyes, lips and tongues can be used for pepper soup which is usually very delicious than that of animal meat. I usually take the pepper soup so as to assure those who patronize us that it is not harmful. It also fortifies one spiritually.

Gazali who hails from Folahan, Ado-Odo in Owode Yewa Local Government Area of Ogun State, further said: “I am an Islamic teacher and a cleric. I own an Islamic school in Owode Yewa. I am also married with eight  children. I am also a native doctor. I cure people of  their ailments and help those who want to get rich quick, by using human parts to prepare charms and concoctions for them.

We use soft bones to cure epilepsy

“Most of the human parts I bought were sold to me by  Kazeem Sanni.  He used to sell dead human head between N3,000 and N8000, depending on the market price. The soft bones that can easily be grinded into powder are very cheap. It is just for  N1,000. It is used to cure ailments like epilepsy.”

Asked why he did not use any of his children since he has eight of them, he said that would reduce the potency of the ritual concoction, adding that its potency depended solely on strangers being used. He said their victims were usually abducted from Lagos State and beyond, with the use of charms.

He further disclosed that  aside the N40,000 paid to Sanni to get him a live human being, he gave him another N5,000 and a charm to hypnotize the male victims. But he said the plan almost failed as Sanni was almost caught. He, however, expressed regrets that despite the use of human parts to make other people rich, he ended up not only being poor but arrested along the line.

The second suspect, Alfa Taofeek, who is also an indigene of Owode Yewa in Ogun State confessed to have bought a human head from the third suspect, Kazeem, which he grinded and mixed with local gin.

According to him, “it was to enable me get rich. I am a Muslim cleric and I have been making people rich through this means but became jealous at a point and decided to get rich as well, since I was unable to get enough money from my clients.

“After drinking the concoction prepared with a human head, I got more customers and made more money. I even threw parties on a monthly basis to celebrate my new level.

“I also used part of the money to sponsor the graduation ceremony of some of my students in the Islamic school known as Alfa Taofeek Islamic School, at Owode Yewa.”

On his part, the third suspect, Kazeem Sanni, claimed to have opted for the money ritual business due to frustration from Customs men.

He said: “At a point, business was no longer moving because Customs men at the border were always seizing the goods, at the end of which their owners would force me to pay for them. I became frustrated even contemplated selling my father’s landed property. I decided to consult Alfa Taokeek Akinola to find out the cause of my predicament. He instructed me to get a human head in order to be rich. After that, he requested a live human being. I attempted kidnapping someone so that I can cut off his head but it was not possible. He then instructed me to exhume dead body from the graves which I did and got him three at the rate of N3,000 each.”

Their arrest, as explained by spokesperson for the Lagos State Police Command, Ngozi Braide, was in compliance with the Commissioner of Police, Umar Manko’s directive to SARS  Commander, Abba Kyari, to get the fleeing suspects, after the arrest  of three members of the syndicate on May 15, 2013, with human parts. 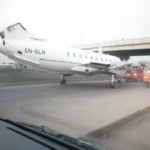 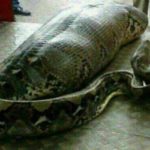