Awww, sorry dear First Lady but truth is, if  he cheats with you, he’ll cheat on you! If you lik cook chicken in diamond sauce or do Kangaroo style in bed..Nothing will make him not cheat on you unless it’s Juju. Besides you should be thanking God your the first single woman on earth to hold the post of First Lady courtesy of dating the president.
French President Francois Hollande has confirmed his separation from his partner Valerie Trierweiler. He told the state-run AFP news agency that their “shared life” had ended.
Two weeks ago a magazine published photos which appeared to show Mr Hollande had been having an affair with an actress, Julie Gayet. Ms Trierweiler spent a week in hospital after the revelations. On Saturday evening she tweeted her thanks to the “wonderful staff” at the Elysee Palace. She said she “would never forget their devotion or the emotion at the time of departure”.
“I am making it known that I have put an end to my shared life with Valerie Trierweiler,” he said in a phone call to the agency.
Ms Valerie Trierweiler announced their relationship six months after he left his previous partner, one-time French presidential candidate Segolene Royal, with whom he has four children.

READ ALSO
APC Has Won The Election, We Are Just Waiting For The Result To Be Announced – Presidency 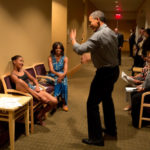