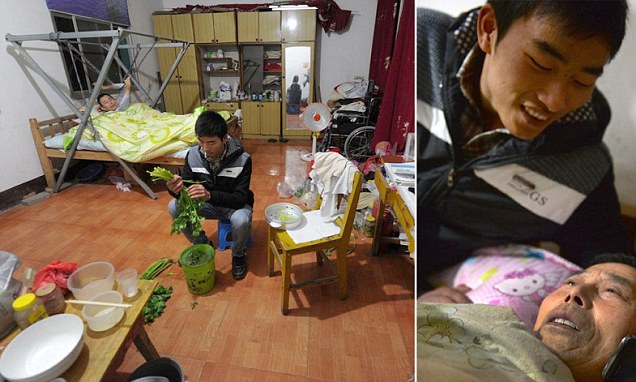 Awww this is so touching!
Most people could forgive Guo Shijun if he gave up on his dream of a university education: because of his full time commitments to caring for his paralysed father and sick mother. Most people would forgive him, but it is possible Shijun wouldn’t forgive himself, as instead of giving up his studies, he persuaded university officials to let his father to stay in his dorm for the full term, after he was paralysed in a building accident. Shijun still managed to get a place at a top university, and, impressed with his dedication in the face of insurmountable odds, they let him bring his father to university with him to lighten his load.
Shijun, now 20, came from a poor family and had a tough childhood, as his mother was left mentally disabled when he was younger following a battle with meningitis.
She was cared for during his formative years by him and his father, and despite this responsibility, he still managed to get top grades at school.
His already tough workload got worse when his father was injured after falling 15 meters off of a bridge he was working on in the city of Liuan in the Anhui province in the centre of China, becoming paralysed from the waist down.
Shijun’s grandparents took over care duties for his mother, but they couldn’t look after his father as well, so he rented a small room near his university dormitory and moved his father in, so that he didn’t have to keep rushing to check up on him between lessons and during lunch. 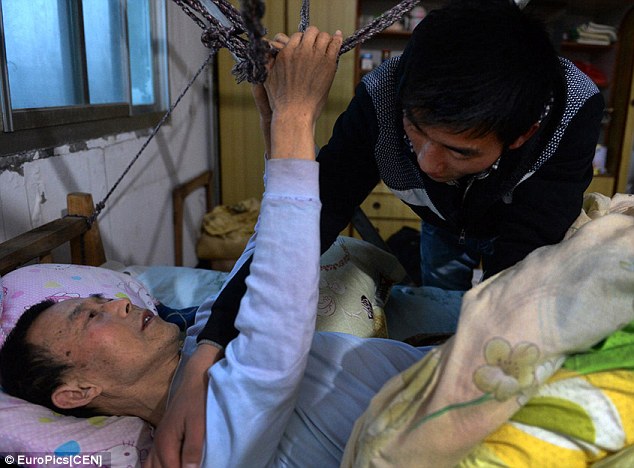 To keep up his studies he paid for university by borrowing money from friends and relatives until he finished. These costs, amount to £2000 a year for tuition alone, not accounting for food, bills and the cost of care for his parents.
However, despite the huge handicap to his studies, he managed to earn a scholarship to help him on his way.
Talking about his experiences, Shijun said: ‘I can’t say life is easy but the only way out of the problem is through hard work so I’m not complaining.
‘I think once I graduate things will get much better.’ 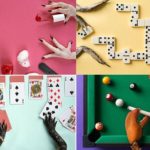 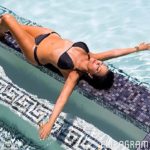