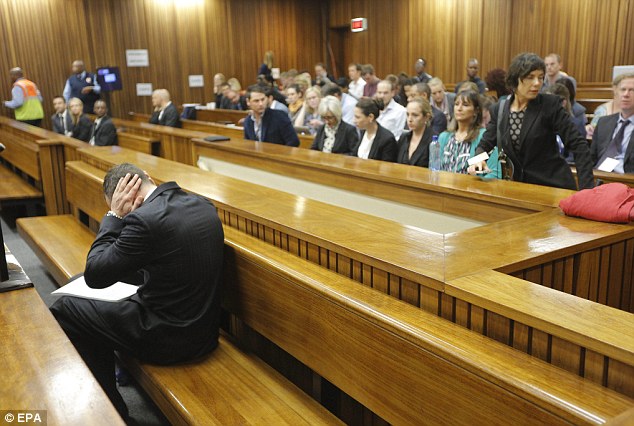 Oscar Pistorius broke down in court today as his defence lawyer argued that Reeva Steenkamp was so badly brain damaged by the gunshot to her head she couldn’t have screamed.
Advocate Barry Roux made the claims in response to a neighbour’s testimony that she heard a woman’s ‘blood-curdling’ screams before and after shots were fired the night the model died. He told the court:

‘We will debate the sequence of the bullets.
‘We will have experts state that there was serious brain damage after the shot to the head, that it would not have been possible for her to scream at all.’

The Paralympian was seen bent double in the dock, with his hands behind his head as Mr Roux said Miss Steenkamp would have lost ‘cognitive function’.
A relative then handed him a handkerchief which he used to wipes tears from his eyes.
Ms Burger, who lives about 180m from Pistorius’s house, is the first witness to give evidence at the trial and has testified to a sequence of events on the night of February 14 last year which contradicts the athlete’s story.
She testified yesterday that she heard ‘blood-curdling’ screams from a woman at the home less than 200 metres away from her own, before shots rang out in the early hours of Valentine’s Day last year.
The sequence of events, if accurate, would undermine the Paralympic gold medallist’s claim that he shot Steenkamp after mistaking her for an intruder.
Pistorius, 27, a double amputee known as the Blade Runner for his carbon-fibre running blades, pleaded not guilty to murder and three unrelated gun charges on the opening day of the trial.
Ms Burger said she heard a woman scream and a man shouting for help before the sound of gunshots on the night a year ago.
She had earlier told how she and her husband had been woken at around 3am that morning by a woman screaming and shouting for help.

‘I was still sitting in the bed and I heard her screams. She screamed terribly and she yelled for help,’
‘Then I also heard a man screaming for help. Three times he yelled for help. Just after her screams, I heard four shots. Four gunshots … “Bang …bang, bang, bang”
‘It was very traumatic for me. You could hear that it was bloodcurdling screams.’

Asked to describe the successive shots, she said there was a pause between the first and second which was longer between the second and third shots and the third and fourth.
Ms Burger, who lives in the Silver Stream Estate, a neighbouring estate to Pistorius’s Silverwoods Estate, said: ‘I told my husband that I do not hope that that woman saw her husband being shot in front of her because after he screamed for help we didn’t hear him again.’
The court heard she had assumed it was a house break-in that had happened. 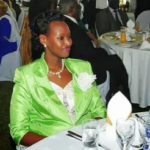