Connect with us
Paul le Guen who was named as Nigeria’s Super Eagles new technical adviser to work alongside caretaker manager, Salisu Yusuf, has made up his mind to abandon his appointment. 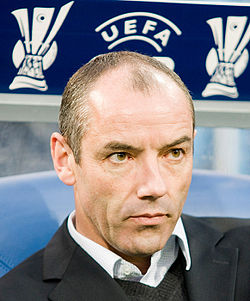 The Technical and Development Committee of the Nigeria Football Federation on Monday, named Frenchman Paul Le Guen, 52, as the new Technical Adviser of the Senior National Team, Super Eagles, adding that he will be assisted by Salisu Yusuf, who takes the role of Chief Coach, and that the appointments are subject to agreement of contract terms with the NFF Executive Committee.

According to a Tweet by Herve Penot, a reporter at international sports magazine, L’ Euipe, Paul Le Guen has reportedly rejected the Nigeria Football Federation (NFF) offer to lead the Super Eagles as Technical Adviser.

The 52-year-old reportedly rejected the offer because the Glass House failed to meet his terms and condition.