Connect with us
Fifteen-year-old Mary Udo has yet to recover fully after being allegedly raped by a police inspector penultimate Thursday. 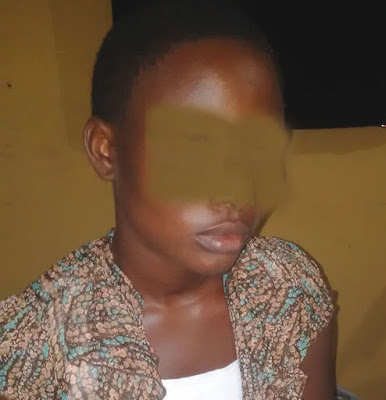 However, the Divisional Police Officer, Mkpat Enin Police Division, on Wednesday, sent pastors and other police officers to the victim’s family to plead for forgiveness.

Udo was allegedly raped at gunpoint by the inspector while she was returning from church. Udo’s uncle, Dr. Ime Stephen, said he was surprised to see the clerics in his home who came to plead on behalf of the police inspector.

Stephen said the pastors, who described themselves as senior apostles, begged him to forgive the inspector, saying the rape case was a big shame not only to the personality of the inspector, but also to the image of the Nigeria Police Force.

Can you imagine? more details when you continue…

Stephen said he reminded them he was not the rape victim, while adding that if the clerics and the police officers had come to see him as the guardian of the victim, he did not have any right to stop them from such visit.

He said the case was reported to the DPO and the family had expected the DPO to come personally and see the victim and apologise to the family given the seriousness of the alleged crime.

“This is a very serious thing – police inspector raping a 15-year-old girl at gunpoint. This is more than robbery. He not only raped the girl, but he also ‘kidnapped’ her for three days, and collected a ransom of N10,000 as bail. What a shame!”

Stephen said the girl, apart from undergoing treatment in a hospital, also needed to be rehabilitated and undergo therapy.

Meanwhile, Udo, a Senior Secondary School 1 victim said she would never forgive the police officer for what he did to her, adding that she was still shocked by the wickedness of the police inspector.

“It was a harrowing experience. There is nothing on earth that would make me forgive the inspector,” she said.

The Police Public Relations Officer in the state, Cordelia Nwawe, in her reaction, said she would not disclose the identity of the police inspector alleged to have raped Udo.

“I would not like to give you the name of the police officer, but we are committed to duty at the headquarters through our Commissioner of Police, Mr. Murtala Mani. He has waded into the matter.

“Investigation is ongoing and I’m sure the policeman alleged to have raped the 15-year-old girl is in custody. When the investigation becomes very conclusive, we will get back to the press, hopefully by next week.”