Menu
Team Nigeria this morning beat Japan 5-4 in their first game at the on-going Olympics in Rio Brazil. 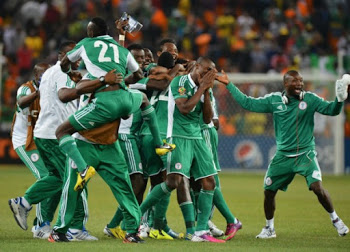 Nigerian Olympic male football team, popularly called the Dream Team, this morning beat the Japanese U-23 side 5 goals to 4, in a pulsating encounter which held at the Manaus Stadium, in Brazil.
The Coach Samson Siasia tutored boys defied all the odds to defeat Japan in the thrilling Group B encounter in Manaus despite arriving in Brazil just hours before their first game this morning.
Oghenekaro Etebo was the star of the show, scoring four goals, while the impressive Umar Sadiq added the other goal to secure the win for Nigeria, reports Compelete Sports.
Japan had the game’s first chance but Emmanuel Daniel made a point blank save before Sincere Seth cleared away for a corner.
The game got off to a blistering start when Sadiq opened the scoring in the fifth minute after imoh Ezekiel’s initial shot was stopped by Japan keeper.
A minute later Japan equalised from the penalty spot through Shinzo Koroki after Amuzie fouled inside the box.
More deets when you continue…
In the ninth minute, Etebo put Nigeria ahead again with a left foot strike off a cross from Shehu Abdullahi.
Japan were back on level terms through Takumi Minamino on 13 minutes following a fine intricate passes which split the Nigerian defence open.
Amuzie, in the 19th minute, hit a long range strike which Japan keeper palmed away for a corner.
Few minutes later, Ezekiel made a timely block which went away for a corner.
In the 31st minute, Ezekiel sent in a low cross which failed to connect with a Nigerian player.
Etebo came close to putting Nigeria in front on 38 minutes but blazed his effort over the bar.
In the 42nd minute, Etebo made it 3-2, pouncing on a poor clearance after his initial effort came off a Japanese player.
On the stroke of half time, Etebo had the chance to score Nigeria’s fourth but didn’t get a clean header from Sadiq’s cross.
Etebo got his hat-trick and made it 4-2 in favour for Nigeria after Sadiq was fouled inside the box.
In the 61 minutes Mikel Obi hit a left foot strike which went narrowly wide.
Etebo made it 5-2 for Nigeria in the 67th minute after Japan keeper made a harsh of his clearance.
Substitute Asano reduced the deficit in the 70th minute.
Nigeria made their first change on 71 minutes with Kingsley Madu replacing Usman Mohammed.
In the 77th minute Daniel rushed out of his line to make a save.
Ndifreke Udo was introduced for Ezekiel in the 79th minute.
Nigeria made their last change on 86 minute with Mikel coming off for Popoola Saliu.
And in the 95th minute, Musashi Suzuki made it 5-4.
Nigeria now top group B and will face Sweden on Sunday while Japan will face Col,ombia.
Thank God that despite been stranded in Atlanta for so many hours and finally getting air lifted free of charge by Delta Airline, Nigerian boys didn’t disappoint us like our boys scout minister who said it wasn’t his business our boys were stranded in ”United States Of Nigeria”.
Watch the video and see Nigerians react to it by linking on the links below:
WATCH: VIDEO Of Minister of Sports Calling USA ‘United States of Nigeria’
ALSO READ: Twitter Explodes After Minister of Sports Calls America ‘United States of Nigeria’
ALSO READ: Nigerian Olympic Football Team Finally Depart For Rio After Being Stranded In Atlanta 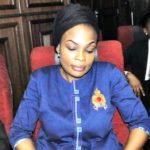 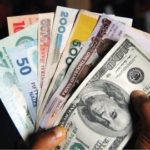