Connect with us
Two teenagers – Yinka Adesola (19) and Ahmed Olaleye (17) – have been arrested by the police in Lagos State for allegedly burgling a public secondary school in the Somolu area of the state. 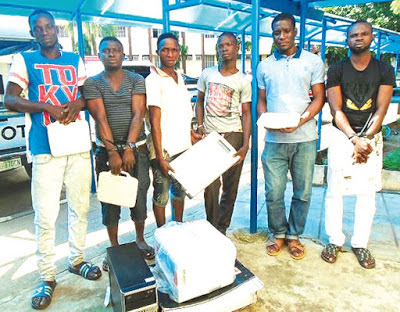 According to the police, other members of the gang are Lukman Sokoya, Ismaila Adebowale, Wasiu Adejare and Ramon Mukaila.

The teenagers, according to Punch, who were arrested on Wednesday, allegedly stole seven computer sets, a scanner, laptops and a printer belonging to the school.

Operatives of the Rapid Response Squad, Lagos State Police Command had recovered some of the stolen items. A source said, “The RRS intelligence team got a tip-off that one of the suspects was hiding in a place on Awoseni Street.

“After he was arrested, he told us that he was the buyer of one of the stolen laptops. That was how we arrested him and five others.”

Adesola, in his statement to the police, denied burgling the school, adding that the items were kept in his apartment by Olaleye.

“I knew I had wayward friends who could put me into trouble. I accommodated Olaleye when the people he was staying with relocated from Somolu. I offered to assist him because he was my junior in secondary school.

“Immediately he moved into my apartment, things started going wrong. Neighbours started losing their phones and money. Later, we discovered that he was the one behind the thefts. My parents asked me to eject him and I did.

“But before this time, he had brought seven laptops, a scanner, a desktop computer, and a printer to my room. Although I saw the name of the school on the items, I thought since he was always visiting the school, they gave them to him. I did not know they were stolen.

“When I did not see him for a long time, I attempted to sell the items. I had sold some of them, but others were just lying in the room. I also gave some out to friends and people that I thought could help to sell them.”

The Police PRO, SP Dolapo Badmos said the suspects would be charged to court after investigation.

If you see someone struggling with letting go of a situation, pray with/for them – Toke Makinwa