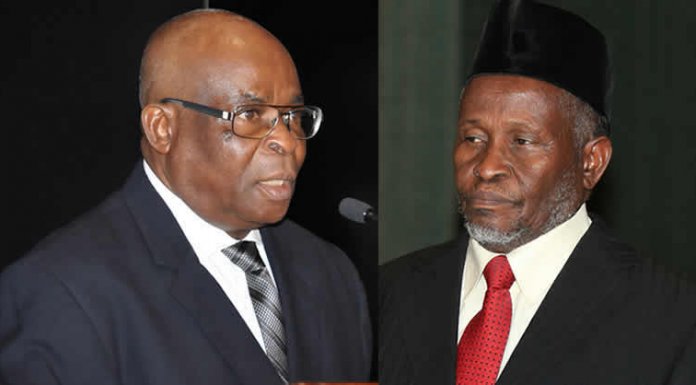 The National Judicial Council (NJC) has served the suspended Chief Justice of Nigeria (CJN), Walter Onnoghen and the acting CJN, Ibrahim Tanko Mohammed, a-week ultimatum to respond to the allegations of corruption and professional misconduct levelled against them.

In the petition, NJC asked Onnoghen to explain why he did not declare all his assets and Mohammed why he presented himself for appointment despite knowing the state of law and also without the involvement of the council.

Due to the gravity of the allegations, the NJC decreased the time and gave the accused persons one week instead of the usual 14 working days to respond to the allegations, an indication that they may be sacrificed to restore sanctity in the highly revered arm of government.

The body, with the powers to discipline erring judicial officers, held the emergency meeting principally to consider petitions written against the two most senior judicial officers in the country.

Former president of the Court of Appeal, Justice Umaru Abdullahi, was elected interim chairman to preside over the meeting. The next in rank at the Supreme Court, who incidentally is not a member of the NJC, Justice Olabode Rhodes-Vivour, could not be drafted into the meeting, since he may be the obvious beneficiary of the crisis.

If the council sanctions Onnoghen and Mohammed with dismissal, Rhodes-Vivour would automatically step in as the most senior justice of the Supreme Court and the NJC would recommend him to the president for appointment.

The Director Information of the council, Soji Oye, said this in a statement made available to newsmen in Abuja that the Chairman of the Code of Conduct Tribunal (CCT), Danladi Umar was also obliged to respond to a petition brought against him.

Soji, however, said the council referred the petition against Umar to the Federal Judicial Service Commission (FJSC) which was the appropriate constitutional body empowered to deal with it. He said:

“In line with its procedure, council forwarded the petitions against Hon. Justices W.S.N. Onnoghen, GCON and I. T. Mohammed, CFR to them for their responses.

“In view of the gravity of the matters involved, council abridged the usual response period from fourteen (14) to seven (7) working days for the Hon. Justices to respond.’’

The Council’s Spokesman said both Onnoghen and Mohammed, had recused themselves from the meeting. He said:

Not being a judicial officer, the NJC referred the petition written against the CCT Chairman, Danladi Umar, to the Federal Judicial Service Commission (FJSC), saying it is the appropriate constitutional body empowered to deal with it.The body adjourned to February 11.