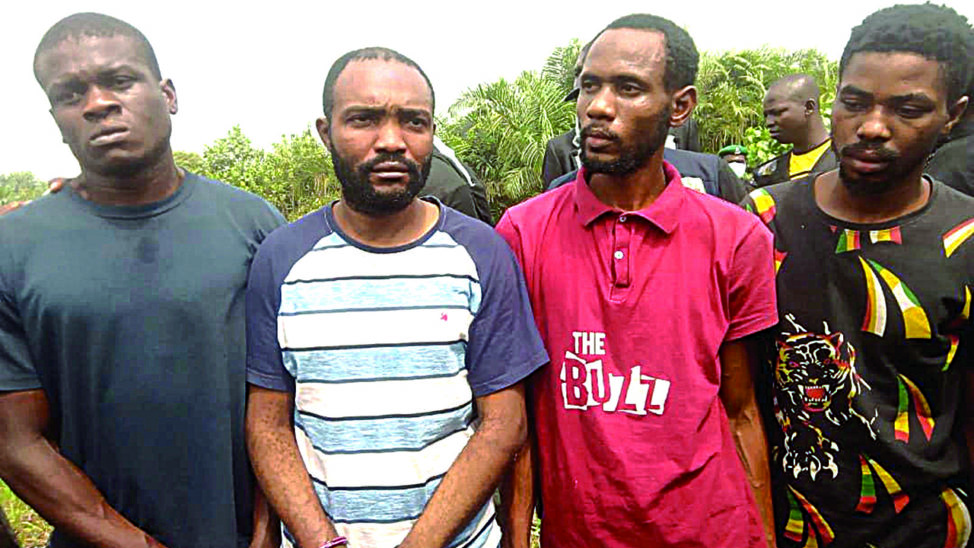 42-year-old prime suspect, Daniel Bob Ibeaji has confessed to police on how he conspired with three others to kill a popular Abuja businessman and owner of Fireman generating sets, Chief Hyginus Odunukwe.

KanyiDaily had reported how Chief Odunukwe was kidnapped and murdered by four criminals pretending to be real estate buyers at the Atican Beach Resort in Ajah area of Lagos State on December 1, 2019.

They murdered him, packed his body inside a bag and dumped him in the Ogombo forest in Ajah, but his body found on 16th January 2020.

Ibeaji alongside his three accomplices: Arinze Igwe, 26; Solomon Cletus, 30; and Israel Obigaremu, 35 were arrested by the Nigerian police.

Ibeaji, who claimed to have studied Medicine and Surgery in Edinburgh, United Kingdom, have confessed to their roles in the killing.

While being paraded by the Assistant Inspector General of Police in-charge of Zone 2, AIG Ahmed Iliyasu, at the canal where the victim’s body was recovered, the prime suspect revealed why the late businessman was murdered Ibeaji said:

“I killed him because I wanted to take the property worth N900 million. Lust for material things made me kill him. My greed beclouded my judgment and made me commit the crime.”

Narrating how he lured Odunukwe to his death, Ibeaji said he saw an advert for the sale of a property at Katampe, Abuja. He added that he approached the security who linked him up with the deceased through his cell phone number.

“I told him I was interested in the property and I think he (the deceased) had a function in Abuja at that time so we were able to meet once in the city. We later met again at Atican Beach Resort, Ajah in Lagos State, on Dec. 1, 2019, where we discussed after which I murdered him with the help of two of my gang members.”

“That Sunday afternoon, when I was sure he was on his way to Atican Resort Hotel, I instructed one of my boys to bring a bag for me. After he signed the documents of the building in question in the garden, I told him to come inside the hotel room so as to give him the money. But when he came in, I started shouting on him to hand the documents over to me but he insisted I must first pay.

“At that point, one of my colleagues brought the bag and as Chief bent down to check the money inside, I hit an axe on his head. We dragged him to the toilet, injected him and he slept off. I wanted to use the document to claim the property as mine and later sell it,” he said.

Ibeaji added that he met Cletus when he was remanded at Kuje Prison, Abuja and discussed the dealings with him, which he promised to help out with. Cletus said he was lured into the act with the promise of N2 million loan to be given to him if he would participate in the plan.

Ibeaji said Igwe, who was a staff member of the resort, was the one responsible for navigating the culprits’ successful exit from the hotel because of his knowledge of its layout.

However, Israel Obigaremu, the Uber driver, said he knew nothing about the evil plan and was unfortunately involved because he allowed Arinze to park the deceased car in his compound. He said Arinze usually called him for jobs of transporting his clients that lodged in the hotel and that was how he met with Ibeaji whom he drove around town.

“Arinze brought the victim’s car to my compound and told me that the car belonged to his boss who had travelled and he promised to come pick it up the next day. I did not know anything about the killing. I was home sleeping when Arinze brought the vehicle to be parked in my compound,” Obigaremu said.

Narrating how they were arrested, Police AIG Iliyasu said: “Bob Daniel Ibeaji, who claimed to be a medical doctor with the following qualifications and certificates: MBBS, Fellow Royal College of Surgery and member Royal College of Surgeon, all in Edinburgh, United Kingdom, as wells as an MBA in Zurich, is the kingpin of the syndicate.

“Investigation revealed that he had been living on ill-gotten money through this means for some time now. Two incidents that have been established against him were that of a commissioner in Bayelsa State, one Honourable Depologa, who was murdered and his body found along Abuja Expressway. This happened a week after his encounter with the victim at Ibeto Hotel, Abuja, which during their discussion he offered to give the victim N220 million for a block of flat situated at Durumi in Abuja. The victim’s wife had to flee Nigeria, vowing never to return.

“The second victim was one Jude Efule, a property developer in Abuja. Efulue also swam into Bob’s net and he was held captive in an apartment and forced to sign a prepared document transferring ownership of the victim’s property to him. He also discovered that the victim had N9 million in his account. His plan was to kill Jude after sweeping his account, but with the help of neighbours who called the police, Bob and his boys were apprehended and charged to court accordingly.

“It was Bob who canvassed the business idea to late Ignatius of yielding N900 million, after which they fixed an appointment at Atican Beach Resort in Ajah.”

Investigation revealed that as Ignatius was about to open the bag they gave him, to ascertain what was inside, Bob grabbed him from behind and one of his boys hit the victim with an axe on the head. There and then, they dragged him to the toilet, strangled him and with the assistance of the boys who held the victim down, Bob injected him twice with the lethal substance.