Lagos State Governor, Babajide Sanwo-Olu has expressed his desire to meet the little boy who was seen in a viral video asking his mom to ‘calm down’ after offending her. 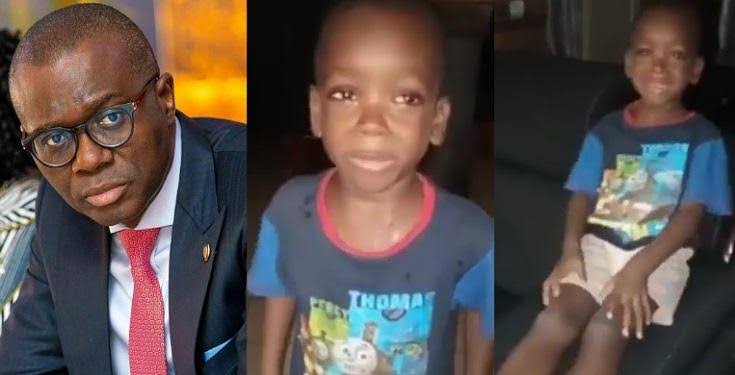 KanyiDaily had published a video showing a little Nigerian boy crying and negotiating with his mother who wanted to punish him for doing something she warned him not to do.

In the video, the boy who was trying to avert being flogged, could be seen smartly telling his mum to ‘calm down’ and even demonstrated how she should do it.

The boy switched from from English to native Yoruba language while trying to get his way out of the trouble, He then negotiated terms and conditions with his mum and promised not to repeat his mistake.

READ:  Ebonyi Will Never Be Part Of Biafra Because We're Marginalized By Igbos – Umahi

Reacting to the video on his Twitter page, Governor Sanwo-Olu said he would like to meet the boy as the video inspired his message to Lagosians,

The governor thereby asked the people to ‘calm down’ as they go on their regular duty, especially as the Muslim celebration of sallah is about to kick off.

He also commended the boy for this sobriety and urged Lagosians to emulate and demonstrate his Self-Restraint at this time the world is combating the scourge of COVID-19. He wrote:

READ:  Despite Protest, Lagos Lawmakers Insists Governor Ambode May Be Impeached Unless He Explains Himself

“I saw a video of one charming young boy online asking his mom to ‘calm down’ as she was set to punish him for his misdemeanour. I was moved by his sobriety, which reflected in his promise of “last chance”, when confronted with the fact that he is a regular offender.

“The exchange was indeed funny, but it depicts the efforts parents put in moulding children into responsible adults. I want to assume that his mom indeed calmed down because the appeal was moving enough to make anyone change their mind.

“Interestingly, the video inspired this special message to the good people of Lagos State because of the deeper meaning it conveys. Fellow Lagosians, we need to ‘calm down’ as we enjoy the coming holiday and festivity.

“It is a commemoration of Prophet Ibrahim’s heart of sacrifice and faith in Allah.
We need to emulate and demonstrate his sense of self-restraint at this time the world is combating the scourge of COVID-19.

“We need to be moderate in our celebration and also observe prescribed protocols towards defeating the deadly coronavirus, which are, maintaining social distancing, washing and sanitizing our hands, and using our face masks. The world needs responsibility and commitment of its people to oust coronavirus.

“I urge every Lagosian to ‘calm down’ and not get carried away by the ‘excitement of the moment’. Like the rest of the world, we are still in the middle of a pandemic and need to remain extremely careful to keep the gains of the sacrifices we have all made in the past months. Let’s calm down!

“Meanwhile, I would like to meet the young boy since we both have exclusive right to the phrasal verb ‘calm down”.

The exchange was indeed funny, but it depicted the efforts parents put in moulding children into responsible adults. I want to assume that his mom indeed calmed down because the appeal was moving enough to make anyone change their mind.

As an aside, I would like to meet the young boy since we both now have exclusive rights to the phrasal verb ‘calm down’. 🙂

KanyiDaily had published a viral video that shows a man insisting that his son, who returned to Ekiti from a Lagos trip, must be isolated for 14 days before he would be allowed into his house.