President Muhammadu Buhari has condemned “the dastardly attack on UN aid helicopter in the North-East on Saturday by the Boko Haram terrorists.”

Boko Haram terrorists had on Thursday attacked a United Nations aid helicopter in Damasak, Borno State, killing two civilians including a five-year-old child in the process.

Edward Kallon, UN Humanitarian Coordinator in Nigeria, on Saturday said both fatalities and several others injured in the attack were on the ground.

“A UN Humanitarian Air Service helicopter was hit by bullets during the attack. No aid workers were on board at the time and crew members are all safe,” Kallon said in a statement.

A UN communication said the aircraft was shot as it approached Damasak and the pilots managed to fly back to Maiduguri, AFP reports.

Reacting in a statement issued by his Senior Special Assistant to the President on Media and Publicity, Garba Shehu, On Sunday, Buhari said that the attack was a “rear guard action” of members of the sect under pressure from the military.

The statement which was titled, “President Buhari condemns Boko Haram’s cowardly attack on UN in the Nort East” reads:

“This latest cowardly attack on the UN humanitarian helicopter is yet another desperate rearguard action by the Boko Haram terrorists who have been under intense pressure from the Nigerian military.

“Let me reassure the international community and Nigerians that this latest cowardly attack on a UN helicopter which claimed the lives of two people, including a five-year-old baby, would not go without severe consequences.

“Boko Haram terrorists are clearly on the back foot and their increasing attacks on innocent civilians, including UN humanitarian workers, was part of their desperation to prove that they are strong in order to cover up their dwindling fortunes.”

Buhari further said that “the security of foreigners and Nigerians remain the top priority of this administration, and we shall leave no stone unturned until we eliminate these remorseless enemies of humanity.”

The president also underscored the need for all humanitarian and other aid workers in the region to, at all times, properly coordinate movements — air or land, with the Theatre Commander and other military authorities.

KanyiDaily recalls a few months ago, President Buhari had vowed not to rest until he secures the freedom of all children and other victims abducted by Boko Haram terrorists in the country.

Buhari made the vow in Addis Ababa, Ethiopia, during a high level breakfast dialogue on “Stop the War on Children Affected by Armed Conflicts, Dividend of Silencing the Guns”, an event on the sidelines of the 33rd AU summit. 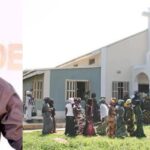 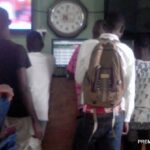