Many Nigerians have expressed dissatisfaction over the oath of secrecy administered on members of the Judicial Panel of Inquiry set up by Lagos State Governor, Babajide Sanwo-Olu.

The panel which includes two Nigerian youths – Rinu Oduala and Temitope Majekodunmi – is to investigate the shooting of unarmed #EndSARS protesters by Nigerian soldiers at the Lekki toll plaza on Tuesday night, October 20, 2020.

The panel is also to probe alleged extrajudicial killings perpetrated by operatives of the now-disbanded Special Anti-Robbery Squad (SARS) of the Nigerian Police Force.

Ahead of the resumption of the panel’s sitting today, members of the Lagos Judicial Panel of Enquiry were allegedly made to sign an oath of secrecy.

READ:  Sanwo-Olu Promises To Carry Everyone Along By Being A Listening Governor If Elected

The oath of secrecy administered on panel members reads in part, “I solemnly swear/affirm that I will not directly or indirectly communicate or reveal any matter to any person which shall be brought under my consideration or shall come to my knowledge in the discharge of my official duties, except as may be required for the discharge of my official duties or as may be officially permitted by the governor. So help me God/Allah.”

The oath given to the panel to sign has been leaked on the social media and many Nigerians are insisting that details of hearings must be made public.

I don’t understand the need for oath of secrecy. @SavvyRinu And Majekodunmi are the representatives of the youth, we stand solidly with them. They should not sign any oath of secrecy. @jidesanwoolu should actually see that the panel is public and televised. #EndSARS pic.twitter.com/Oe7Tf7aBmb

Why are independent judicial panel members swearing oath of secrecy to @jidesanwoolu for a public hearing?#LagosJudicialPanel#PoliceBrutality#LekkiMassacre #EndSARS pic.twitter.com/5QUXnZUCeU

How can there be justice in a panel swearing oath of Secrecy to the Governor??? How pic.twitter.com/yLlNH2nJOX

If members of Lagos Judicial Panel of Enquiry are truly made to sign an oath of secrecy, NOW is time to end that scam.

These Panels are a PUBLIC inquiry into a matter of PUBLIC interest about PUBLIC crimes and atrocities committed by the Police.

TELEVISE ALL THE PANEL SESSIONS.

This Oath of Secrecy is legally defective.

One, the idea of 'secrecy' is occultic; S. 38(4) of the 1999 Constitution frowns at 'secret society'. Oath of Confidentiality would be better.

Two, oaths are better sworn before a Commissioner for Oaths, certainly not before a Gov. pic.twitter.com/66w3yoaDSg

There is absolutely no need for folks joining this panel in Lagos state to swear an oath of secrecy. It just makes everything look suspect from the get go. Trust levels is currently at the lowest level, @jidesanwoolu. LASG should be doing everything to build trust! #EndSARS

If Lagos asked members of the Panel to sign an oath of secrecy, just know there’s no depth these people will not sink into to cover the truth.

RT this to join me to insist that:
ALL PANEL SESSIONS MUST BE TELEVISED.

I’ve just received confirmation the shameful “oath of secrecy” document was indeed from the Lagos State Govt but it has now been rejected by panel members.

Rinu and the other person need to confirm this to us.

No oath of secrecy is permitted. Human beings died. No secrecy on people's blood! https://t.co/2NCgMTJS8C

KanyiDaily recalls that Governor Sanwo-Olu had earlier vowed that he would do everything within his power to ensure that those found culpableof the Lekki shooting were punished.

READ:  Dead Man Still Looks Fresh And Breathing After His Corpse Was Exhumed One Year After His Death [Video] 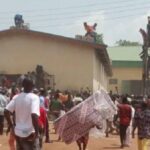 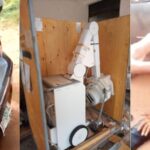