Mrs Florence Ajimobi, the wife of late immediate Governor of Oyo State, Abiola Ajimobi, has lost items worth millions of naira after a branch of her Grandex Supermarket was partly razed by fire at the Bodija are of Ibadan, Oyo State. 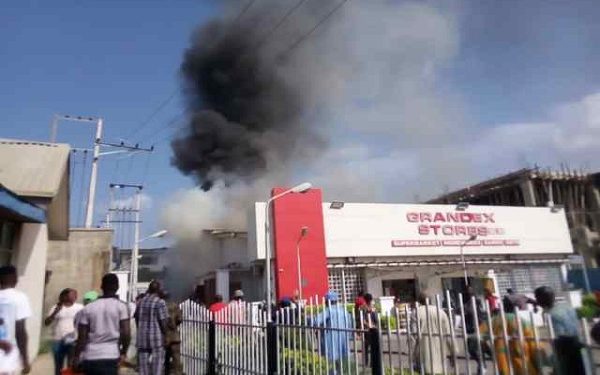 An eyewitness, Mr. Bamidele Osinlowo, said the fire started around 3pm on Sunday from the back office of the outlet, and was gradually spreading to the main stores until fire fighters arrived.

“It started about 3pm. When we heard the shouts from the workers, I immediately called the Oyo State Fire Service.

“Within ten minutes, they came with a bigger truck. We moved in to join them to bring extinguishers. Somebody from Zenith Bank brought one. Another person brought extinguishers from Afe Babalola Educational Centre, Bodija.”

Men of the Oyo State Fire Service who arrived the scene promptly curtailed it from razing the entire outlet or spread to nearby facilities.

It was gathered that as soon as Mrs. Ajimobi arrived, some of her aides joined in evacuating goods from the stores while some stern-looking officers of Operation Burst were on ground to prevent looting.

The team leader of the Federal Fire Service, who spoke with journalists under anonymity, attributed the incident to electrical sparks and over-loading of electrical sockets.

Meanwhile, Oyo State Governor, Seyi Makinde has narrated his humble beginning which saw him selling bread at the gate of Adeoyo State Hospital in Ibadan.

Buhari’s Government Worried Because They Hoped For Trump’s Victory, Not Biden – Joe Parkinson