The Minister of Finance, Budget and National Planning, Zainab Ahmed, has disclosed that Nigeria’s public debt stock is projected to rise to N38.68 trillion by December 31, 2021.

Mrs Ahmed disclosed this on Tuesday at the budget defence session opened by the Senate Committee on Local and Foreign Debt at the National Assembly, Abuja.

She said the total debts, comprising domestic and foreign borrowings of the federal and state governments and the FCT, stood at N31.01 trillion as at June 30, 2020.

The minister, however, assured Nigerians not to worry about the dept, saying the federal government had not defaulted in the repayment of its loans.

“We have been meeting all our local and foreign obligations as and when due. We have never defaulted in any debt service,” Mrs Ahmed added.

KanyiDaily had reported how the total public debt portfolio of Nigeria rose to N28.63 trillion within a space of three months, from December 2019 to March 2020. 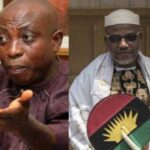