A woman of eight simply identified as Mrs Gladys has been rescued and taken to the hospital after she was locked up in a cage by her husband who accused her of witchcraft in Orerokpe in Delta state. 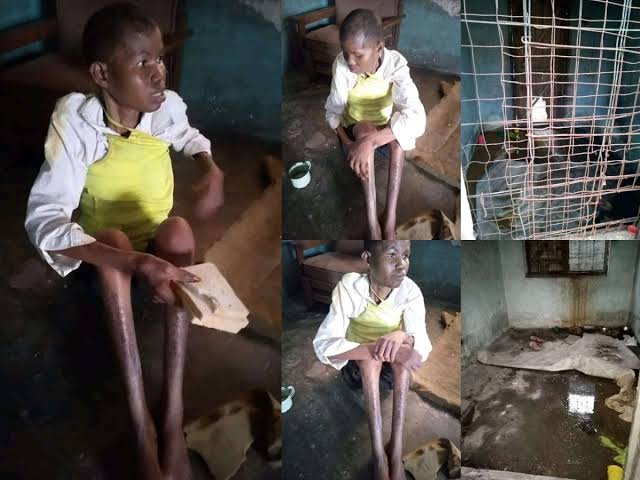 Mrs Gladys was rescued and taken to the General Hospital in Orerokpe for treatment on Tuesday after the intervention of a human rights activist, Harrison Gwamnishu, who is the founder of Behind Bars Initiative.

The activist said the mother of eight is originally from Ozoro community in Delta but got married to a man from a neighbouring community known as Orerokpe.

He said that after many years of their marriage, the hubsand and his family members accused the lady of being a witch and threw her into a cage.

However, despite the witchcraft accusation, the husband would sneak into the cage at night and have sexual intercourse with her, which resulted to the woman having three of their children while she was in the cage.

Harrison said he rescued the woman on Tuesday after he was notified about her predicament by a resident of the community. After which the woman was taken to the General Hospital in Orerokpe for treatment.

READ:  Man Heartbroken After His Wife Divorced Him, Forces Their Daughter To Go With Her [Photos]

Sharing photos of the woman on his Facebook page, The activist wrote:

“ACCUSED OF WITCHCRAFT AND CAGED FOR MORE THAN 3-YEARS IN OREROKPE, DELTA STATE.

“We received this few hours ago and we are currently in Orerokpe for her full REHABILITATION and the arrest and prosecution of all those involved in this despicable act. All road leads to OREROKPE.

“Back Story: She spent the last four years of her life locked up by her supposed husband. She was peeing and defecating in the same room where he fed her bread. Not the regular sweetened bread though. She gave the said man eight children, three of which she had while she was locked up by him in Orerokpe community.”

READ:  "I Warned Him, It Could Get Worst" - Deji Adeyanju Reacts To Obi Cubana's Arrest By EFCC 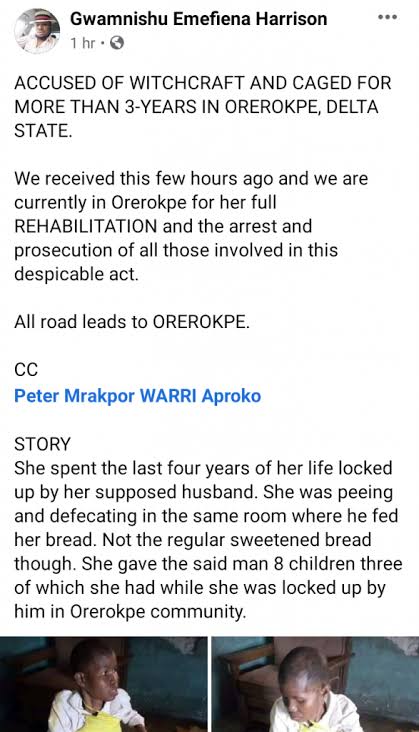 KanyiDaily had also reported how a middle-aged woman identified as Mrs Ngozi Chukwuani was rescued after she was chained to a pillar by her husband, Uche Chukwuani, in Ebonyi State. 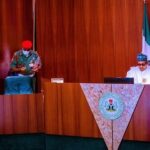 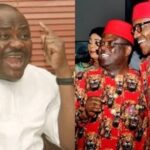