A video has emerged showing officials of Abuja Municipality Area Council (AMAC) attempting to demolish a shopping complex located at Lobito Crescent, Wuse 2, Abuja, with dozens of people and goods worth millions of Naira still in it.

In the viral video, a woman could be heard crying out that there were several persons transacting in the building when AMAC decided to demolish the structure not minding the lives and properties that would be lost.

According to her, the AMAC officials did not inform the shop owners who were going about their daily business upstairs before they started demolishing the building downstairs, putting their lives at risk.

It took the intervention of a man who interfered and stood in front of the building daring the operator to kill him first, before he will be allowed to effect more damages on the structure.

I am sure of the Oga on top loyalist is interested in this land.

KanyiDaily had also reported how #JusticeForJoy was trending on twitter after a female’s mechanic, Joyce’s workshop was demolished by the Government. 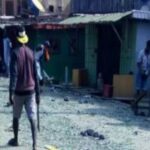 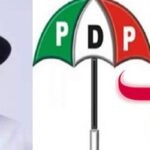