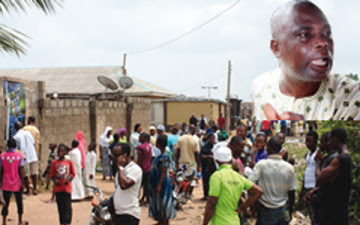 What exactly would make a man go to different salons, collecting people’s hair and paying off the salon owners?
This is a question that only a 60-year-old man, Adewale Okunade, a landlord on Segun Olatunji Street, Ijoko, Ota, Ogun State, can answer.
Okunade, who hails from Oyo State, narrowly escaped being lynched yesterday when some people in the neighbourhood pounced on him. They alleged that the hair was being taken to a herbalist in Cotonou, Republic of Benin, who uses it to prepare charms for him.
Some people said they found Okunade’s behaviour bizarre, insisting that there was more to his action.
It was gathered that the man had been in the business for some years but nemesis caught up with him on the fateful day when his ‘business partner’, a bricklayer, gave him away.
An executive member of the Community Development Association said Okunade allegedly confessed that he had been buying human hair.
According to the CDA executive, the victim said he had been using the hair to cure himself of festering sores on his leg.
He said the suspect denied the hair was meant for rituals, saying he used to take the hair to an herbalist to prepare concoctions for his sores.
He said many traditional medicine practitioners who were there when Okunade was apprehended, said human hair could only be used for rituals not for curing sores.
He said, “The suspect’s partner had gone to a barber in their neighbourhood to buy some hair. The barber, however, refused. The suspect sent his partner to go to the barber’s apprentice.
“When they got to the apprentice, he agreed, but unknown to them that the barber was monitoring their movement. The barber decided to lay ambush for them.
“When he (barber) saw them with a cellophane bag, he raised the alarm and  many people in the neighbourhood were drawn to the scene. By the time they checked the contents in the bag, they saw plenty of human hair.
“That was how the community pounced on his partner and started questioning him about the source of the hair. It was in the course of that the partner said it was Okunade who sent him.
“The people moved to Okunade’s house but he was not around. When he came back and people related the incident to him, he left the community the following day.
“By the time he came back, he thought the residents would have forgotten about the incident, but when they saw him, they mobbed him. It was then he explained that he had sores on his leg that refused to heal and that he had been curing them with concoction mixed with human hair.
“The community, not satisfied with his explanation, decided to hand him over to the police at Sango Police Station.”
Another resident, who craved anonymity, said, “We have yet to come to terms with his pedestrian explanation. As for us, he is not saying the whole truth.
“We learnt that he pays between N200,000 and N300,000 for each consignment of hair. You can see that his explanation lacks the essential elements of truth. I am also amazed that human hair has become a cure for sores.”
The spokesman for Ogun State Police Command, Mr. Muyiwa Adejobi, said the story was twisted by the community.
He said the suspect had only solicited for hair because of his festering sores.
Adejobi said, “The story was not like that. The man (Okunade) has a sore and he said he needed human hair to cure the sore. He had not gotten the hair; he only solicited. The community just raised the alarm which resulted in the man’s car being vandalised.
“He reported to the police that his car was being vandalised and that they wanted to kill him. That was how the police mediated to avoid the man being lynched.”