Popular singer, Waje has set the social media abuzz after sharing the loved up photo of her lover who is surprisingly her fellow musician, Ric Hassani.

Waje, who is known for living a private life, had taken to her Instagram page and shared a photo of herself and Ric Hassani looking all loved up on a couch with the caption, “It’s time…????.”

In the photo, the couple were intimately captured with Hassani’s head resting on Waje’s laps, while the letter was seen playfully touching his nose.

The photo caption also suggest that the two might actually be getting married or have only decided to make their relationship status public.

Many celebrities including their fans have taken to social media to share their excitement that the talented singer has been able to find the love of her life.

So apparently, Waje and Ric Hassani are getting married. Waje posted this picture on her IG with the caption “It’s time”. 🥰

This is so beautiful, I’m so happy for them. 🥰🥰🔥 pic.twitter.com/hLKRJBCnqf

Waje and Ric Hassani in a romantic position, which raises the question of them being in a relationship.pic.twitter.com/S2To7qEEJk

Waje and Ric Hassani are allegedly about to get married.

Aunt Waje don propose to ric Hassani o:
And they'll be tying the knot pretty soon; it seem so to say.

Na the gist be that. pic.twitter.com/bnKLuxWNZs

So Ric Hassani and Waje are getting married?

KanyiDaily recalls that Waje was seen in a video lamenting about the state of the music industry and the reception of fans towards her music. 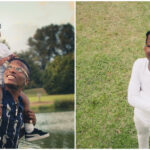