Nollywood actress, Empress Njamah has taken to social media to cry out over the unending beef between Peter and Paul Okoye of the now defunct music group, P-Square. 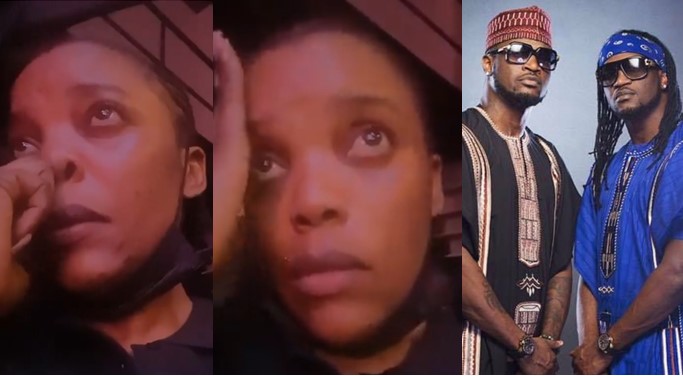 In a video shared on her Instagram page, Njamah urged the twin bothers to put their differences aside and reunite just like the Plantashun Boiz – 2face Idibia, Faze and Blackface – who agreed to end their age-long dispute; to perform at the tribute of their late friend, Sound Sultan.

Sharing a video from Sound Sultan’s memorial where a man was talking about the twin brothers, the actress noted that everybody can make Peter and Paul’s coming together possible if people stop taking sides in their fight.

She emphasized that life is too short and begged the the Psquare brothers to come together to make peace as a family even if they will not sing together as they used to.

Empress Njamah wrote; ”WE ALL CAN MAKE THIS HAPPEN IF ONLY. We can stop taking sides. Judging them. Spitting fire on social media

”Criticizing. Comparing them. Most of you with the loudest voice have not put your home in order. You lack the spirit of LOVE n FORGIVENESS n PEACE (u need help but afraid to admit).

”No time to check time. Use your page n spread LOVE if u can’t show it. Speak positive things in their lives. Celebrate both cause they are ONE.

”Mustn’t be back n singing but just MAKE PEACE..

”What is wrong with us? What the hell happened to the good old days when showing LOVE to each other was priority? @peterpsquare @iamkingrudy. I miss you both together. The hangouts, dance, fun, positive energy! KEEP RESTING @soundsultan”

READ:  Woman Allegedly Bites Off Her Husband’s Manhood After Fight With Him In Imo State

The PSquare twin brothers had since 2015 gone their separate ways over a very serious family feud and have taken on solo music careers as Peter aka Mr P and Paul aka Rudeboy.

It has been alleged that the music group, which was considered as the biggest in Africa, began having cracks after Peter decided to marry his wife, Lola Omotayo.

Rumours have it that the Okoye family including their mother was not in support of Peter’s marriage before her death, but the singer went ahead to fulfil his wishes.

The elder brother, Jude Okoye had however stated that the reason P-Square broke up in 2015 was because Peter didn’t want his (Jude) involvement in the group.

Jude said problems started when Peter wanted him out of P Square because he felt that Usher and Beyonce had succeeded without family figures. However, Paul disagreed and that was allegedly where the fight started.

Last year, the twin bothers had celebrated their 39th birthday parties in their various houses which was attended by a number of celebrities including Yemi Alade, Harrysongz, and others.

Peter’s wife, Lola Omotayo had shared a birthday message to celebrate the twins, urging them to reconcile after years of beefing each other.

But Paul Okoye slammed her over the birthday message to both of them, saying she’s the brain behind their fight and she’s a manipulative person.

KanyiDaily recalls that Peter Okoye had also disclosed that he and his brothers, aren’t yet talking to each other and he isn’t going to be beating around the bush about it.