Paul Okoye from the defunct music group P-Square has taken to social media to drag Lola Omotayo, the wife of his twin brother Peter, over her birthday message to both of them. 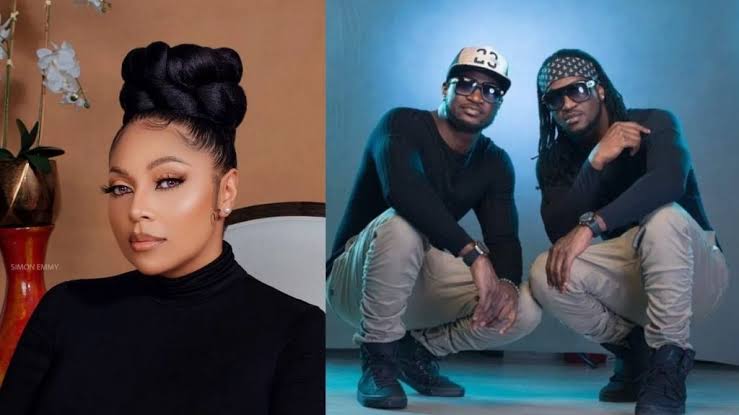 KanyiDaily recalls that yesterday, Lola Omotayo had taken to her Instagram page where she shared a birthday message to celebrate the twins, urging them to reconcile after years of beefing each other.

Reacting to her post, Paul revealed that he and Lola have not spoken in 4 years, but she always goes on social media every year to wish him a happy birthday, trying to look like an angel in the sight of social media users.

Paul also accused his brother’s wife of being the brain behind their feud saying, now that they are apart, which was exactly what she wanted, why is she still trying to manipulate things with the pretense.

READ:  IVD Threatens To Commit Suicide Over His Kids, Weeks After His Wife Bimbo Died

“At the age of almost fifty, you think you can still be manipulative and always trying to be in control as usual. Well am not there and also Jude is not there anymore which was exactly how you wanted it,” he wrote.

“Aunty for four years we haven’t spoken but every 18th of November you come out as usual to type shit and they end up saying ‘awwww she’s a good woman’ meanwhile they don’t know the evil things you do behind closed doors. While in the outside you portray an angel.”

“Anyways it’s social media era what do I expect. Next year will come again you’ll still come and type shit. You know me very well and you know I don’t pretend. So continue doing what you are doing. You don cast already, no need to expose you that’s why I’ve never said anything because it’s family. Let your guilt deal with you.” 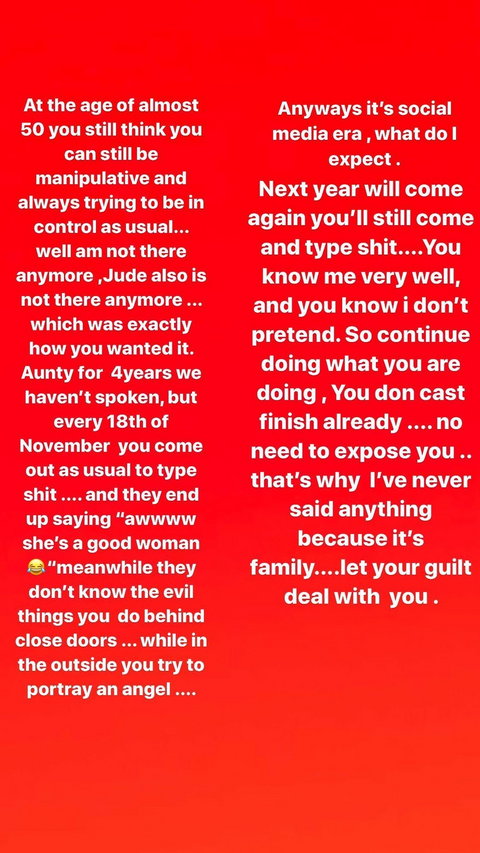 KanyiDaily recalls that Peter Okoye had last year disclosed that he and his brothers, aren’t yet talking to each other and he isn’t going to be beating around the bush about it.