Eight basketball players of Nigerian heritage – with two born in the country – were drafted into the National Basketball Association (NBA) league for 2020. 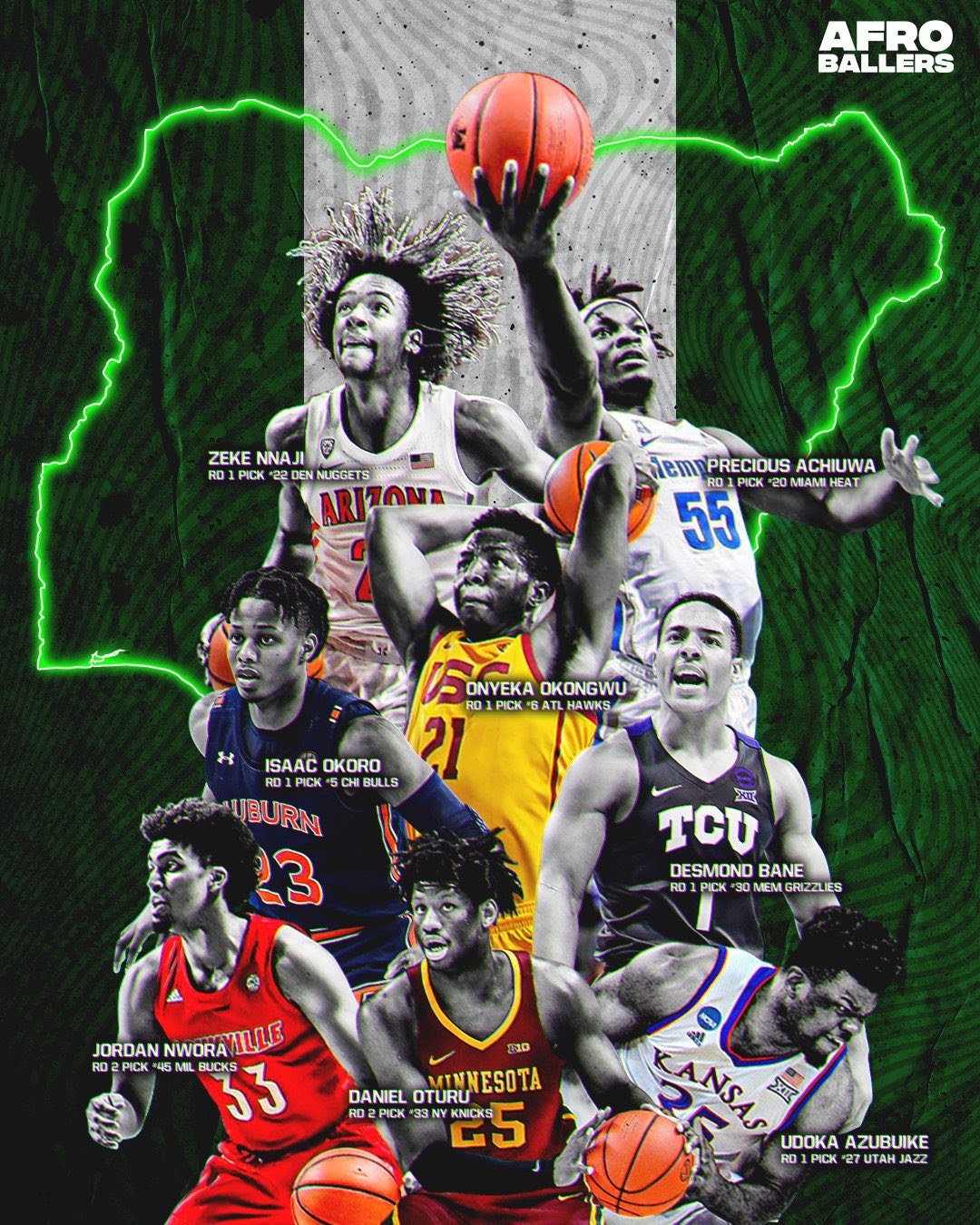 The draft held on Thursday morning was historical because this is the first time up to eight players with at least one parent of Nigerian origin were drafted into the lucrative NBA league.

Among the eight Nigerian basket players who were drafted, six of them will play in the first round, and two in the second round.

Below is a list of all the players of Nigerian descent in the 2020 NBA draft picks.

Achiuwa was born September 19, 1999 in Port Harcourt, Nigeria and grew up playing soccer. He moved to the United States and in eighth grade focused on playing basketball.

On May 17, 2019, Achiuwa committed to play college basketball for Memphis Tigers under head coach Penny Hardaway. Achiuwa was selected with the 20th pick in the 2020 NBA draft by the Miami Heat.

The Heat was the runner-up in the 2019/2020 NBA finals losing to the Los-Angeles Lakers. Achiuwa is described as having an “elite physical profile and ideal defensive versatility.”

Udoka was born 17 September 1999 in Lagos, Nigeria. He was the youngest of five, with two older brothers and two older sisters.His father Fabian was a police officer, and his mother, Florence, was a middle school teacher.

Azubuike was selected with the 27th pick in the first round of the 2020 NBA draft by the Utah Jazz.Udoka Azubuike is an elite shot blocker, defender and finisher with immense size and athletic ability.

Congrats to the Big 12 PoY Udoka Azubuike on being selected No. 27 overall! #NBADraft pic.twitter.com/wvhbnHCSjD

Okoro was born January 26, 2001 in Atlanta, Georgia to Nigerian parents (Godwin and Gloria) who migrated to the United State in the 1980s.

Okoro played for the United States at the 2018 FIBA Under-17 Basketball World Cup in Argentina. He was selected with the fifth pick by former Lebron James club, the Cleveland Cavaliers in the 2020 NBA draft. Defensive toughness and versatility are Isaac Okoro’s NBA calling cards.

Can't wait to join the squad and #DefendTheLand. Been waiting my whole life for this moment 🙏. Let's get it @Cavs! Check out my very own NBA #PaniniInstant trading card! #WhoDoYouCollect #partner pic.twitter.com/RhXLwtcqCe

READ:  Buhari Has Taken More Loans Than Other Presidents In 30 Years Put Together - Atiku

Onyeka Okongwu was born December 11, 2000 in Los Angeles, California. Okongwu is the son of Nigerian parents, Kate and Mike Okongwu. His mother, who is a registered nurse, moved to the United States from Nigeria in 1999. Okongwu was selected with the sixth overall pick in the 2020 NBA draft by the Atlanta Hawks.

Onyeka Okongwu teared up after being selected by the Hawks at No. 6 🙏#NBADraft pic.twitter.com/sJDnHQxs1T

Zeke was born January 9, 2001 in United States of America. His father is a Nigerian (Alphan) while his mother (Janel) is from Minnesota. His younger sister, Maya, is a highly regarded high school basketball recruit at Hopkins High School.

Nnaji was selected with the 22nd pick in the 2020 NBA draft by the Denver Nuggets. Nnaji is a wiry strong, mobile big man who is skilled enough to stretch the floor and threaten with perimeter shooting with a little development

All glory to The Most High🙏🏽🇳🇬✊🏽 I’m coming ready to work!! pic.twitter.com/cXYnNwYjak

Daniel was born September 20, 1999 in Brooklyn, New York. Daniel parents hailed from Nigeria. His father (Francis) is from Fadeyi, a suburb of Lagos while his mother (Deborah) is from Ife.

Both of his parents are ministers at a branch of the Mountain of Fire and Miracles Ministries in Saint Paul, Minnesota.

His favorite NBA player is Kobe Bryant, and he cites Joel Embiid as a role model. Oturu was selected in round 2 with 3rd pick and with the 33rd pick overall in the 2020 NBA draft by the Minnesota Timberwolves.

The Timberwolves have selected Daniel Oturu with the 33rd pick in the 2020 NBA Draft. pic.twitter.com/33b8Vt97Z8

This is gonna be fun.

Jordan Nwora, born September 9, 1998 in Buffalo, New York to a Nigerian father and American mother. His father, Alexander Nwora is a basketball coach. He is a Nigerian-American basketball player selected by the Milwaukee Bucks with 45th overall in NBA draft.

Our own JORDAN NWORA is a Milwaukee Buck!!

The second Nigerian player to be drafted after playing for the national team. (Michael Gbinije) pic.twitter.com/qedhwFC0YN

With the 30th pick, the Grizzlies select Desmond Bane @brhoops

Final pick of the first round. pic.twitter.com/5zqrKbSLaJ

Bane was born June 25, 1998 in America. At age 13, Bane discovered that his father, Etieno Ekiko, lived in Nigeria. He was picked as overall 30 by Boston Celtics but was traded with Memphis Grizzlies. Bane is now an American basketball player for the Memphis Grizzlies of the National Basketball Association (NBA).

READ:  Mbappe Reacts To Allegation That Pogba Asked Witch Doctor To Cast Spell On Him

Nigeria is well represented in this year's draft class! 🇳🇬

KanyiDaily had reported how female basketball star, Maya Moore married Jonathan Irons, the man she helped free from prison after 23 years of wrongful conviction in the United States.