Isreal DMW, the logistic manager of popular singer, Davido has cried out to Nigerians to help beg his boss not to sack him as purported on social media. KanyiDaily had reported how Davido sacked Isreal DMW and unfollowed him on Instagram following his comments on the indictment of the embattled Deputy commissioner of police, Abba Kyari.

Israel had questioned the morality of Nigerians condemning Abba Kyari who was indicted by the FBI in an investigation of alleged multi-million dollar fraud perpetrated by a suspected internet fraudster, Ramon Abbas, popularly called Hushpuppi.

Taking to his social media page, Israel said he is currently depressed and Nigerians should help him apologise to Davido on his behalf.

He added that he has been working with the singer for nine years and he was unaware of the gravity of his deed until Ubi Franklin called his attention to it.

“You people should kindly help me beg my oga not to sack me, tru his personal lawyer Jiggy, than adding to my current depression of pressuring him to send me off.

“What would be you people’s gains, after 9 good years? I never knew the gravity of my actions, until Ubi Franklin personally called to tell me. Am very sorry sir.” 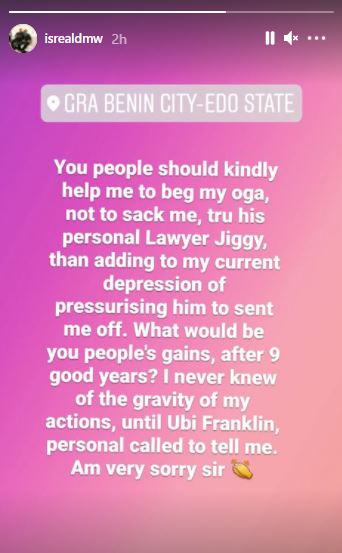 KanyiDaily had reported how Hushpuppi confessed to bribing Abba Kyari to have one of his rivals, Kelly Chibuzor Vincent, arrested and jailed in Nigeria following a dispute over the $1.1 million fraud that victimized a businessman in Qatar.