Governor Willie Obiano has placed N20 million bounty on killers of Dr Chike Akunyili and others in Anambra State. 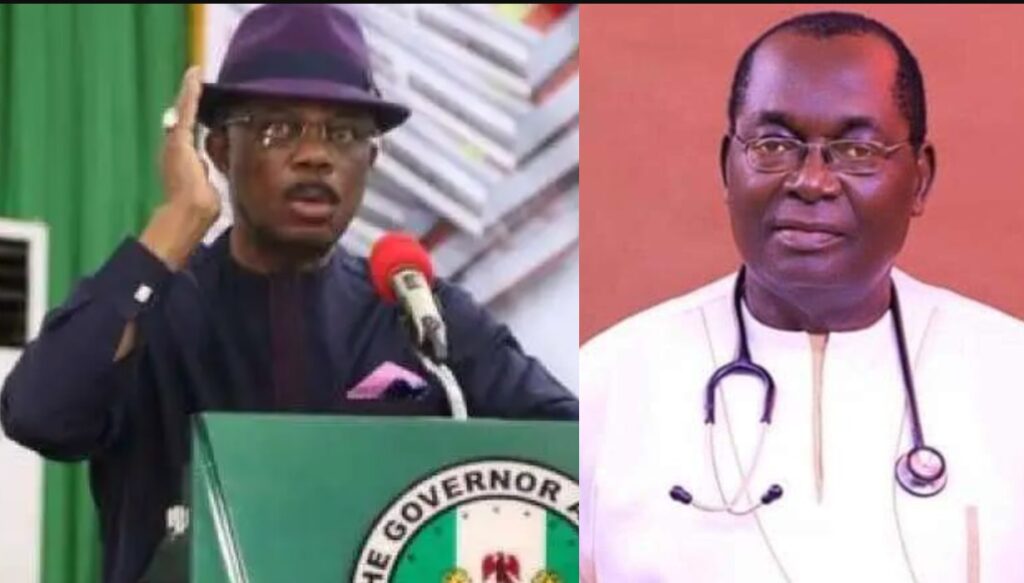 Anambra State Governor, Willie Obiano has placed a N20 million bounty on those who killed Dr. Chike Akunyili, the husband to late former Director-General of the National Agency for Food and Drug Administration and Control (NAFDAC), Prof Dora Akunyili.

KanyiDaily had reported how Dr Chike Akunyili was shot point-blank in the face and was left to die in the most gruesome manner by gunmen.

The medical doctor was killed on Tuesday night after he attended a memorial in honour of his late wife, Dora Akunyili, in Onitsha.

While addressing the state on Wednesday, Governor Obiano expressed sadness over the killings in Anambra.

The governor offered N20 million to anyone who has clues of persons who killed over 10 persons including Chike Akunyili in the state.

Obiano also condemned “in very strong terms, the violence that has been witnessed in Anambra in the past few days”

“Since last weekend, some armed persons have unleashed terror with sporadic attacks on innocent citizens in various parts of the state.

“From the briefings, I have received from Security Commanders, Offices of some political parties, branded campaign vehicles and individuals occupying them have been attacked with killings and burning of vehicles observed. Other innocent road users have become victims of this menace with many losing their lives and others, their properties.

The governor noted that between Sunday 26th and yesterday and 28th September 2021, there were attacks on citizens at Oko, Agulu, Obosi, Nkpor, Nnobi, Nnewi and other places, had left about ten people dead “including an illustrious son of this state, Dr Chike Akunyili, husband of late Prof Dora Akunyili, who was reportedly gunned down yesterday around Nkpor.”

“Ndi Anambra, these attacks and accompanying deaths cannot be justified and must stop now. I have therefore conducted an extensive security meeting and have directed all Security Agencies to step up and confront this monster ravaging our land,” he disclosed.

He called on those involved in the security architecture of the state to take very seriously, the threat to livelihood and boldly rise to confront same.

“Everything that needs to be done will be done and no stone will be left unturned in this effort. My directive to this effect is clear and I urge every security personnel on duty in Anambra State to do his utmost best to secure our people,” Obiano pleaded.

He also urged all citizens of the state and every person living and doing business in the state to join forces with the government to confront the common enemy, confronting the state, adding that the people could not afford to “condone this savagery for any reason whatsoever. I, therefore, call on all our youths in the state to rise up and protect our communities.”

Governor Obiano called on traditional rulers, Presidents General, clergymen, vigilante groups and all leadership structures to take responsibility and in conjunction with all security agencies, work to restore order immediately.

“To reinforce our commitment and seriousness on this issue, I on behalf of the State Government, wish to announce a twenty million Naira (N20,000,000.00) reward for any useful information leading to the arrest of the perpetrators of these heinous attacks on our state,” he pledged.

He reiterated the need to bring those behind the killings to book and urged the residents to report anybody bearing a firearm who is not a security or vigilante personnel, so the authorities concerned could deal with this monster, once and for all.

The governor condoled the families of all those who had lost their loved ones in the course of the attacks, promising that his administration would leave no stone unturned in getting justice for them.

“I urge all citizens of the state to unite in this fight against all forms of terror, intimidation and tyranny. We will not succumb to invaders as I am convinced that no Anambra son will indulge in this kind of heartlessness. I warn all those promoting and participating in these violent attacks to leave our State or pay a high price as we will definitely catch up with them,” Obiano reassured.

He appealed to all law-abiding citizens and persons living in our state to go about their lawful businesses, expressing confidence that the state remained “the Light of the Nation, where darkness has no place,” adding that “the events of the last one week will not be allowed to fester and by God’s grace, we shall overcome.”