Boko Haram terrorists have killed 10 people and injured 21 others with mortar shells during fresh attacks in Maiduguri, Borno State.

Residents said there were explosions near the Adamkolo and Gwange areas of Borno state on Tuesday evening, and the attack lasted for an hour.

Some residents also said they heard multiple gunshots around the Mairi area a few minutes past 6 pm. Mairi area is a student-dominated area near the University of Maiduguri.

A resident who confirmed the attack, said “I was on my way to the mosque when I started hearing the sounds of the bomb blast, followed by that of gunshots. The sounds were coming from Gwange area of the town.”

Another resident said: “What I hear is that the insurgents are trying to come into town through Mairi village, close to the University of Maiduguri.”

ALSO READ: Teenage Suicide Bomber Kill Three People When She Blew Up Herself In A Crowd In Borno

A militia leader, Babakura Kolo, told AFP that the insurgents fired two volleys of explosives on the city, which led to death of 10 people and 21 others injured.

“We have six dead in Adamkolo and four others in Gwange from the mortar explosions,” militia leader Babakura Kolo told AFP.

“The explosives were fired by Boko Haram terrorists from Kaleri on the outskirts of the city,” he added.

At least 16 people were injured in Gwange and five in Adamkolo, said another militiaman, Umar Ari, who gave the same death toll.

“Luckily they didn’t hit anyone. After shooting more minutes they left towards Boboshe,” he said.

This is coming a few days after Boko Haram terrorists reportedly killed seven Nigerian soldiers during a deadly ambush at a military base in Borno State. 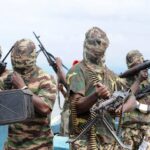