Former Big Brother Naija housemate, Maria Chike Benjamin has made a public appearance with her married lover, whom she was accused of snatching in Dubai.

On Friday night, Maria and Kelvin attended the One Africa Music Festival in Dubai, where she met her colleague, White Money, and other BBNaija ex-housemates who are currently on a sponsored trip to the emirate city, courtesy of Pepsi.

In a viral video circulating the social media, White Money could be seen exchanging pleasantries with Maria who attended the event with her lover, Kelvin, despite controversies surrounding their relationship.

White Money also exchanged a gentleman’s handshake and a hug with Kelvin as Maria stood and watched, before fans swarmed him to take photographs with them.

KanyiDaily had also published another video showing White Money gushing and performing with a belly dancer who took the stage and impressed guests with her whining waist in Dubai. 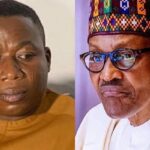