The Human Rights Writers Association of Nigeria (HURIWA) has called on President Muhammadu Buhari to arrest and prosecute the Minister of Information and Culture, Lai Mohammed, for lying to Nigerians about the killing of unarmed #EndSARS protesters at Lekki Toll Gate, Lagos. 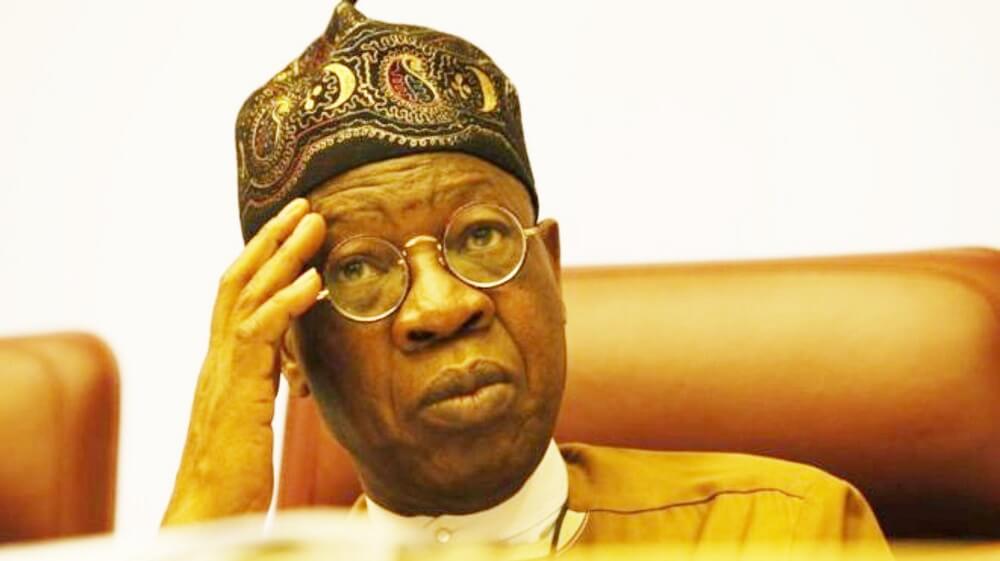 HURIWA made the call while reacting to the report by the Lagos State Judicial Panel of Inquiry on the shooting incident that occurred last year during the #EndSARS protest at the Lekki Toll Gate.

Despite extensive and credible media coverage of the incident, Lai Mohammed had continually denied the killings, describing the shooting at the tollgate as a “phantom massacre”.

The minister said that the ‘killing’ claims were false and misleading, as most of those who made the claims of losing people were yet to show up and give evidence a year after such allegations.

Lai Mohammed Should Be Arrested And Prosecuted

Reacting to the report in a statement issued on Tuesday, HURIWA called for Mohammed’s dismissal, arrest, and prosecution for his appalling falsehood which has now been contradicted by the #EndSARS judicial panel in Lagos.

HURIWA noted that if President Buhari fails to punish the minister, he would be remembered as a dictator who oversaw the massacre of young Nigerian protesters.

The statement reads; “Huriwa is asking President Muhammadu Buhari as a biological father of many well-educated children, to order the arrest and prosecution of his minister of information Lai Mohammed for committing a grave and heartless offence that is equivalent to the denial of the Holocaust of the 6 million Jews by Adolf Hitler which is punishable by nearly half a century of incarceration.”

HURIWA “is also commending the brave members and Chairperson of the Lagos State Judicial Panel of Inquiry on the #ENDSARS PROTESTS especially the circumstances surrounding the massive cases of extrajudicial killings by the Army and armed police when these armed forces opened fire with lethal weapons targeted at the unarmed protesters.”

The rights group has asked the President not to sweep the lawlessness of the security agencies under the carpets just as it said if the President allows his information minister to get away with the impunity of denying the massacre that happened before the eyes of the World captured live on video cameras, then he will be remembered long after he has retired from public office as a dictator who oversaw the genocide of young protesters and the generations unborn will never forgive him for this.

“President Muhammadu Buhari must note that as a Father of many Children he needs to ensure that impunity is never tolerated especially the extrajudicial killings of very youngsters of Nigeria by the Army just for protesting police Brutality”, HURIWA added.

Meanwhile, DJ Switch has also reacted to the findings of the Lagos #EndSARS panel, saying that the Nigerian Government shattered so many lives and tried to destroy her life for what they desperately wanted to cover up.